Living in China is all about trying various Chinese dishes from different parts of country, exploring new tastes and coming back to places where the food is outstanding. But sometimes we miss Western food, whether it is food from our own country or from another. Thanks to a large number of foreigners in most of China’s major cities, we can enjoy Western cuisine from different countries in many restaurants. Today, I want to introduce you some of the best (based on foreigners’ taste buds) Western restaurants in Dalian. Let’s start!

This place consists of everything what is called “Western food”. The menu combines modern creative and traditional authentic American food in a Brooklyn – styled restaurant. There, you can taste fresh home-made bread, sauces and sausages. Western atmosphere is maintained by the American owner – Wayne and English-speaking staff.

Indian Hut with authentic Indian food prepared by an Indian chief. In this restaurant you can feel like in India not only by the food but also because of the décor. The menu has English and photos, so if you are not familiar with Indian food and the names do not tell you anything, you can choose by looking, though we “eat with our eyes”! 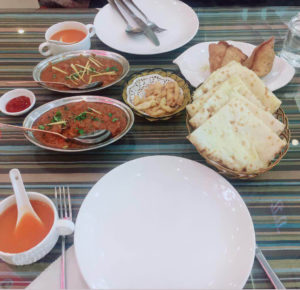 Here we can find European food, not only from Denmark but also Italian pizza and variety of other European dishes. This is a place good for brunch as well as for dinner, and their choice of desserts is mouth watering!

Famous among Dalian Ex pats as well as Locals for its burgers and cocktails but offers much more dishes from American cuisine. The restaurant has a really tempting offer buy one – get one free on burgers and drinks on Monday afternoon and DIY drinks during happy hour.

Al Bacio is the most well – known for its real Italian pizza baked in the wood stove but it also has many kinds of Italian pasta and starters. You can combine the food with an Italian wine or freshly made fruit juice. The nice thing about the restaurant is that the kitchen is separated from the dining hall by glass wall, so the customers can watch their food being prepared.

Restaurant offers German cuisine specialities in Dalian. Lenbach’s flagship dish is a traditional German sausage platter with mashed potatoes and sauerkraut. To enjoy your meal to the fullest it is best to have it with a pint of German craft beer.

As Dalian was under Russian rule for a significant period of time in its history, there is much Russian heritage in the city. Besides many Russian accents in Dalian’s architecture, also places with Russian cuisine can be found. In Friday you can not only eat delicious Russian food but also feel the climate of Russia by the interior décor of the place.

Authentic French restaurant in Dalian with an energetic owner-chef Julien who prepares mouth watering meals as well as maintains friendly atmosphere, so the guests can feel at home. The restaurant has an interesting wine cellar to which guests can have access.

Cosy cafe & bakery in the heart of Labour Park – one of Dalian’s best attractions. Great for a bit of rest after walk in this lovely park or time spent on carousels and ferry wheel (underneath which it is located). Euro – Bake is famous for its wide range of cakes, pizza and bread followed by delicious coffee.

Want to check out Dalian’s Western restaurants? Why not Apply Now!