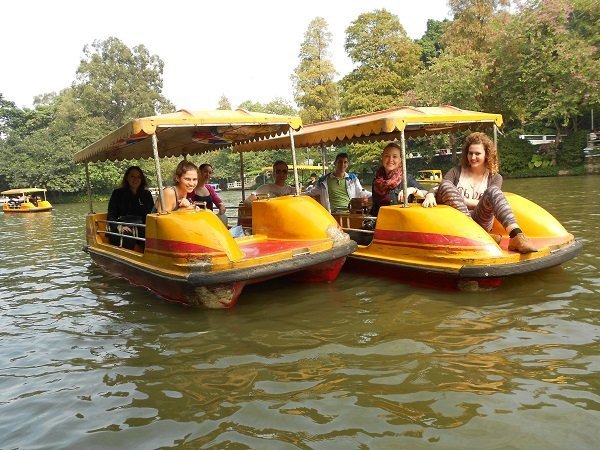 As I was studying one year in Guangzhou before my internship at InternChina I was pretty excited about organizing the trip to Guangzhou. I wanted to show everyone the city where I spent the last year in China.
We were a nice group of 12 people. We left Zhuhai on a Friday evening after work. We took the super-convenient high speed train to Guangzhou, which takes around one hour (one way 70 RMB). From the Guangzhou South Railway Station it was about 30 minutes to our hostel by metro.

We dropped our stuff off in the hostel and went to the BBQ nearby for dinner. It was a really relaxed evening. We were talking and drinking till late into the night.

On Saturday morning we met again for breakfast together and to do some sightseeing. I took the interns first to the Yuexiu Park. In the Park we found some rides, it was like a little amusement park. We had some fun on the rides, and after that we even rented some boats to row around the lake. Despite all the bumping into each other and terrible rowing skills, thankfully no people or boats were capsized or harmed. 

In the Yuexiu Park there is also the Guangzhou Museum, where we learned a little about Guangzhou city’s history.

After the Yuexiu Park we went to the Liwan Lake Park. It is a beautiful park with Chinese architecture, a lot of lakes and a beautiful night scenery. It was nice to walk around, take pictures and chill a bit.

Having been on our feet all day, everyone was pretty exhausted by the evening, but as we only had one weekend in Guangzhou, I wanted to follow my plan strictly! So after the parks, I gave everyone some time to get ready before we set out for the night.

I booked a table in a Teppanyaki Restaurant. Teppanyaki is Japanese and you get a big table with your personal cook, who will prepare the food in front of you. It is one of my favorite restaurants because the food is just amazing!!! You pay 168 RMB and you can drink and eat what you want for 2 hours. We ordered A CRAZY AMOUNT OF FOOD!!!!!! We had steaks, sushi, different kinds of seafood, different desserts, a lot of Sake (Japanese Alcohol), beers, wine and so on. CRAZY!!! By the end we were fairly drunk, including our cook who was happily drinking with us. For most of the people it was the first time Teppanyaki so it was a very nice experience.

After the Teppanyaki we went to a nice Club in Guangzhou. We were dancing and having fun! We had an amazing night!

The next day we met at noon to have some Dim Sum. Guangzhou is famous for its Dim Sum, which is Cantonese food. We went to the Guangzhou Restaurant chain, a famous restaurant with many branches around Guangzhou. After the brunch, we did not have anything planned, so everyone got some free time. Some went to the Gaungzhou Fake Market (where you can buy just EVERYTHING!) and some went to the famous Walking Street in Guangzhou for shopping.

We took the train back on Sunday evening. While we chatted about the trip, most agreed that the best part was probably the Teppanyaki, and the interns asked me when we could go back to Guangzhou. After that I was happy that my trip was pretty successful and everyone had a great time.  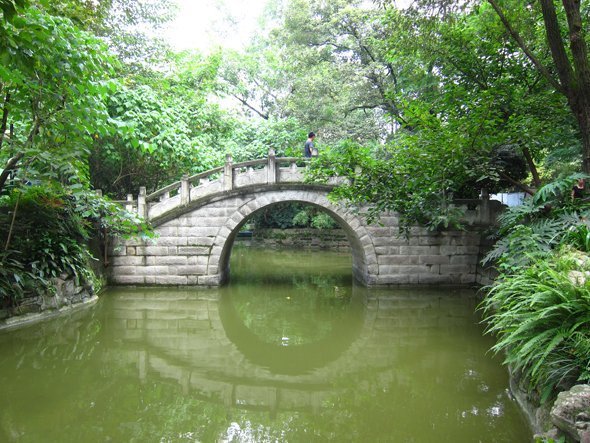 Chengdu Blogs, Cultural, Eating Out in Chengdu, Things To Do in Chengdu
Posted on 22/08/2013

A Journey through Chendu I – People´s Park

For the average Chengdu resident it probably was not the most interesting thing, but for the foreigners, especially those who are ready to discover Chengdu metros might be one of the first things, which they may become curious about. Therefore, we present you a series of metro stations in order to introduce Chengdu in an approachable way.
People’s Park

In People’s Republic of China, there are a lot of things contain the word “people” ;), the Chinese currency RMB: people’s currency, the Central Bank of China: People’s Bank. In a lot of major cities one can easily find a people’s park.

How’s the People’s Park of Chengdu different from the other ones?

Once called “Shaocheng Park”, the history of People’s Park can be dated back to 1911, when the last dynasty of China was forced to give up its power. As the dominating 满族(manchu people) lost their privileges, they had no choice but to make their living by themselves. For example, they transformed their palace into park and required entrance fee. It has soon attracted a lot of non-manchu citizens. Women who were not allowed to visit public places before then came to visit the park in Chengdu.

For young women, the park was not only a place to hang out, but also for having dates. During the transformation from feudal society to republic, the Chinese mentality changed a lot. Thus, the strict manner of Confucianism has lost its importance. However, Chinese people were not yet open enough for new thoughts.  Most young Chinese women rather wanted to look for their future husband themselves than getting an arranged marriage by their parents. Discreet and elegant, the park was a perfect place for dates.

You can also find some nice tea houses and restaurants where you can enjoy traditional Chinese and Sichuanese cuisine. The tea houses are usually crowded with a lot of old local people who play Mahjong and Chinese chess. The fresh smell of nice Chinese Green Tea is a perfect experience on a Sunday morning while sitting next to the beautiful lake of Chengdu’s People´s Park.

Would you like to explore Chengdu as well? Have a look at our internships and apply now!

Jamie Bettles
Cultural, Qingdao Blogs, Things To Do in Qingdao
Posted on 28/12/2010

Today my hostmother took me to the TV-tower in Qingdao.She told me, that you can have a great overwiev of the city from there… (if its not cloudy or foggy 😉
But I´m afraid it was ^^
Anyway it was very beautiful up there.

After that we went through a park were usually chinese people practise their Tai Chi or Qi Gong daily in the morning.
Accidentally we met a 60 years old chinese  man, who was practising Kung-Fu.
He was very kind ans allowed us to take a video of this art.
Afterwards we talked to each other and he told us, that he is practising every day Kung-Fu since 30 years. Wow, respect for that.
After all he offered me to teach me Kung-Fu for free the time I am going to stay in China…
I was just lost for words.
Of course I will take this oportunity to collect some more authentical impressions of this great culture.
Here is a screenshots of my videotape: