By Sophie Combers
Great numbers of people come to China to do an internship through InternChina, and a good few of them also come in order to learn a little Chinese at the same time.

Of course, anyone who has studied Chinese as a second language knows Mandarin is no easy tongue in which to even achieve competency, let alone fluency.

Many may have studied Chinese in the classroom previously—that’s what I did. It’s very different, however, to hear the language around you every day; on the street, on the radio, on television, and written across billboards and signs.

This twenty-four-seven immersion tends to speed up your learning much faster than you’d expect—it’s hard not to pick up a few words when the sounds of Chinese stream steadily about you in a hundred currents of language, and it’s harder still to live in China without knowing a few words to help you function in everyday life. Knowing basic greeting words, numbers, and how to express your level of language skill are good pieces of knowledge to have under your belt (although, don’t be too scared—many people in China, unless told otherwise, will assume foreigners don’t understand a word).

There are a few difficulties related to learning Chinese. Unless you’re one of those lucky people who already speaks a tonal language, Chinese can often be a real challenge with its tones, and its many, many, many written characters. But I would argue (with my own far from fluent Chinese skills) that it’s still good to learn.

Not solely for the workplace or for a resume bullet point, although those are sound and solid reasons beyond a doubt.

Here’s another reason I realised during my sojourn in Qingdao—Chinese is just so fascinating!

Here’s a secret: it’s true that sometimes (or often) all the tones will sound the same, every grammar rule will seem impossible to sort out, and all the characters will seem to be hatching devious plots to scramble themselves before your eyes.

But Chinese’s written pictorial words can also become artworks of ink and water and grace on paper; black characters so fluid they seem to stir into motion and life, their every tiny image telling a different story, holding millenniums’ worth of China’s age-old history and culture.

Chinese’s spoken words can form sequences of flowing sounds so clear and quick they remind you of a series of chiming bells, simple and easy as blinks of sunlight.

And when in China, there’s no delight quite like being able to respond in Chinese to a question spoken in Chinese, translating the other person’s query and your own answer and hardly needing to think about it. You can feel truly at home once you can speak the local language, it really is one of the best ways to get to know China and its people. One of my favourite quotes, attributed to Nelson Mandela, is: ‘if you talk to someone in their own language, that goes to their heart’.

Chinese isn’t just grammar and route learning, it gives you the power to understand the fabric of the world around you in the country itself.

And gaining that ability makes all the hours of memorising words, all the embarrassing moments of miscommunication—one hundred per cent worth it, and more. 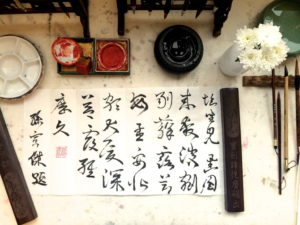