On the eve of 31 October, many Western countries come alight with the glow of countless jack-o’-lanterns that signify the arrival of Halloween.  In China, Halloween celebrations among the younger generation are gradually becoming more and more popular. Kids’ Halloween parties and pumpkin-carving is becoming a favourite with less conservative parents in big cities. Nonetheless, apart from a few expat-oriented bars and pubs, the practice of dressing-up is nowhere near as widespread as in the West.

There is, however, no shortage of traditional festivals dedicated to the dead in Chinese culture. In fact, the majority of festivals contain an element of sacrificing offerings in the form of money, food and wine to deceased ancestors. Qing Ming Festival, Ghost Festival and Spring Festival are among the better-known ones.

The Ghost Festival, also known as the Hungry Ghost festival, falls on the 15th day of the 7th lunar month. It stems from Taoist and Buddhist belief that on this day the gate that separates the world of the dead from the world of the living opens, and ghosts are believed to visit the living in their homes. To appease the hungry ghosts, their living descendants prepare elaborate feasts and burn joss paper. In many ways, the Hungry Ghost festival is similar to Halloween in the West.

The Spring Festival, the most well-known among all Chinese festivals, is celebrated at the turn of the Chinese lunar calendar. Traditionally, the Spring festival was a time to honour deities as well as ancestors. During the Spring festival, the whole family gathers from different cities and provinces for a reunion. Offerings to ancestors play a big part in the proceedings. The lunar calendar is consulted about the specificities of which way to face when bowing and making offerings. Traditionally, dumplings (jiaozi) are offered to the ancestors to invite them to join in the festivities. 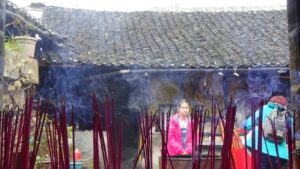 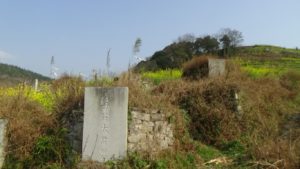 There is a distinctive difference between Chinese and Western cultures in the way they interact with ghosts. While in Western culture Halloween is the height of human-ghost interaction, in Chinese culture deceased ancestors play a much larger part throughout the year. The interaction between the dead and the living is not limited to a few select days in the year. People commonly burn joss paper and offer wine at street corners. Although strict guidelines that guide the process of interaction are put in place in the cities, people that live in the countryside have a much closer relationship with their dead ancestors. We only need to look at how graves form a natural part of the architectural landscape in the countryside to see that the divide between dead and living is nowhere near as defined as it is in the West. For the Chinese, it is not just during Halloween that the worlds of the living and the dead come together.