Early on Saturday morning our interns from the Chengdu branch headed out on the train for Leshan. The forecast suggested it would snow; a rare sight in Sichuan Province, but that didn’t dampen our spirits.

After getting off the train at Leshan, we took a short taxi ride to the Leshan Buddha and surrounding area. After paying our admission fee and entering through the gates, the beauty and the attraction on show stunned us! 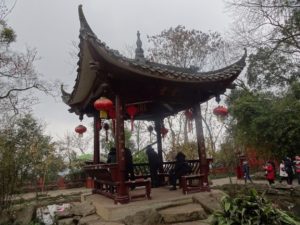 Whilst it may be expected that it is just the Buddha on show at Leshan, there is in fact a whole array of statues and monuments to be admired. We started by ascending the mountain up to a look out point over the rivers beneath, where there was a fantastic view over the valley below.

After a short walk through a forested area we ended up at a pagoda standing tall at the top of a wide staircase. When we reached the foot of the pagoda we could see a few Buddhists walking around the square base reciting prayers. 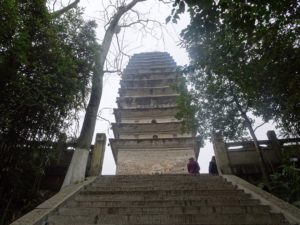 We then headed towards the Giant Buddha taking in the sights as we walked through beautiful lily ponds full of Koi fish gracefully gliding through the water. At the head of the Buddha there was a giant bell being rung by a monk to ward off evil. 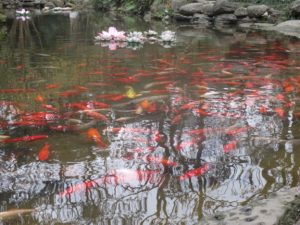 Then it was time for the main event.

The Leshan Giant Buddha stands a giant 71m tall and looks over the confluence of the rivers Dadu and Min. Which eventually flow in the giant Yangtze river. The Dadu starts its journey in the Tibetan plateau before winding its way through Kanding. Then onto Leshan eventually ending up in the East China Sea. This towering structure was built between 700-803 AD and contains an elaborate drainage system in order to prevent weathering.

After a short fact file by myself to prepare the interns for what was ahead, we made our way to the top of the stairs, which descend down the cliff face beside the Buddha. This allowed us to get a true feeling for the scale of the massive structure. Descending our way down was the perfect opportunity to capture some fantastic pictures before reaching the bottom. We took our time, and stood at the feet of the world’s largest pre-modern statue, capturing some images and enjoying the roars from the rivers below. 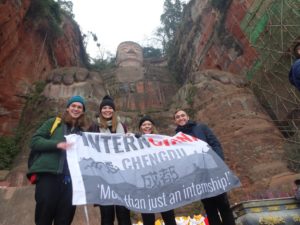 Inspired by this adventure? Apply Now!