When you are in an Asian city and come from the Ruhrarea in Germany like I do, you will quickly realize that the transport system is different. Whereas in Germany the buses seem to be modern, some of the buses that run in Chengdu are a little bit older. At least I’m not afraid to use them but luckily I don’t need to get a bus to my office. I use the subway. But even though the subway is very modern, every time it is an adventure to use it. Apart from the masses of people who enter the subway, the adventure begins when you enter the subway.
Firstly a giant metal detector waits for your bag, and a metal detector gate nearby for you. Most importantly, if you are in a hurry be prepared to hand over your cups of tea, bottles of water or every drink you have in your bag. The nice security guards behind the metal detector gate will check it, because you are not allowed to have inflammable liquids with you. Sorry for everybody who enters the subway with a bottle of deodorant, it will be collected by the security and the next day could be a little bit smelly. Or you just take a taxi, because the taxi is still cheaper than a new bottle of deodorant in China.

By the way don’t worry if the metal detector makes some noise at the time you enter it, that isn’t a sign that you will get controlled by the security. After this procedure you can enter the subway. 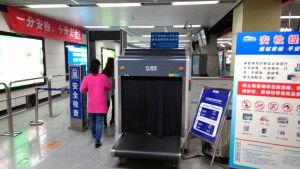 The right time will allow you to have some privacy. Not every time will you get a seat but there’s still some space to stand on your own. But to catch the right time means 11 o’clock.

The office times in China are from eight/nine to five/six. The subway is full around these times. Consequently I am travelling with tens of thousands others every morning and every evening apart from Saturday and Sunday. While changing from line 2 to line 1 some of Chengdu’s citizens will run upstairs to be the first row in front of the door. 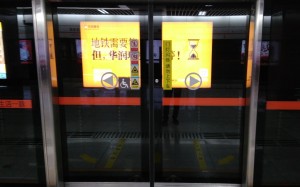 I forgot to mention that you will stand in front of a safety glass which prevent people to get pushed down to the rails. I am already used to the pushing and pulling around me in the subway and I totally lost my feeling for my comfort zone or better say distance zone. You will not find it in the subway.

Using the subway at the rush hour in Chengdu is exactly what was in my mind when I think about Asian super cities and their subways.

It is part of the life here and I am not here to experience a life like in Germany. In the end you will get used to it very fast and it is worthy experience.