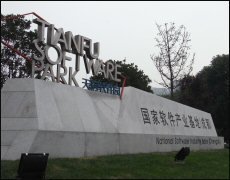 The “Silicon Valley” of the future – “Tianfu Software Park”

As an intern at Internchina, we frequently go out for meetings in the city: introducing InternChina to companies who are looking for an intern from the West, finalising contracts with companies, visiting interns we have successfully placed and so on. It is (almost) always nice to get out of the office for an hour or so, because it is a nice change to the many hours a day we spend in there.
One of the places we quite frequently go for business meetings is the “Tianfu Software Park” in the Southern part of Chengdu. It is not far away from the so-called “Biggest building in the world”: the “New Century Building“. However, the “Tianfu Software Park” has a total of 2.2 million sq.m and hosts hundreds of IT companies: IT consultancies, game and app developers, IT designers and many more.

Chengdu’s software park is often referred to as the “Chinese silicon valley”. During my visits to China since my first time in 2006, I’ve encountered such denotations like the “Chinese Venice” (the city of Suzhou) or “the Chinese Las Vegas” (Macao) quite often. In Europe, we also have similar monikers for some places – think of the Polish capital Warsaw as the “Hong Kong of the East” due to its skyscrapers symbolizing the city’s importance as an economic hub for trade and investment from the East.

However, I think that Suzhou has little association with Venice and if the Chengdu’s software park will ever have roughly the same importance in the future as Silicon Valley has for the world now – we don’t know (A few Indians and I, I guess, have their doubts). Basically, it depends on how Chengdu and China as a whole cope with it’s main economic and social challenges ahead.

In Europe, I have the feeling that we talk too much about democracy in China (the “Chinese Democracy – there is it again) and way too less about the countries problems and (potential) instabilities. The main challenges that also pose barriers for “Chengdu’s Software Park” on its way to its goals to be the “the Chinese silicon valley”, are enormous; an aging workforce, a widening gap between rich and poor, social media challenging the ruling party, environmental degradation on a vast scale – just to mention a few.

Alas, if you want to experience living in a city that thinks it can boost it’s importance and reputation of software development sky-high; a city that is said to be THE place for software and IT that everyone in the world will know in ten years’ time; a city that smells and stinks at the same time of economic growth and aspiration – come to visit Chengdu! Now! This unique atmosphere won’t last forever.

Apply now for a real China experience, in Chengdu, Zhuhai or Qingdao.

Currently producing roughly one fifth of all computers in the world, Chengdu remains to be one of China’s best kept secrets[1]. The city continues to be sporadically acknowledged in the same breath as the country’s other manufacturing hubs of Shenzhen and Guangzhou, yet has been growing at a faster rate for the past 5 years than any other major city center in China. Now specializing in high tech commodities, Chengdu is poised to become China’s own response to America’s Silicon Valley. With a combination of government support and a fertile business environment, the city’s high tech aspirations are centered on the Tianfu High Tech Industrial Park.

Beginning back in 2001 when Intel opened up one of the largest chip assembly and testing plants in the world, Chengdu has zipped past its once humble agriculture origins into the 21st century, managing to attract the likes of Texas Instrument, Motorola, Foxconn, and many others into the region[2]. Through a combination of favourable corporate taxes and the offering of highly subsidized office spaces for domestic firms, the city’s IT field has managed to grow at a dazzling 40% per year. Providing both the infrastructure and human capital desired by international corporations, opportunity is abound in the city once known as “the Country of Heaven”. Once producing crops for the nation, Chengdu now has positioned itself to be the country’s main tech hub. Home to some of China’s best and brightest tech universities, the city’s potential appears to be limitless in the coming years!

Looking for career opportunities in hi-tech manufacturing and programming? Why not come to Chengdu! Apply now or send us an email for more information.