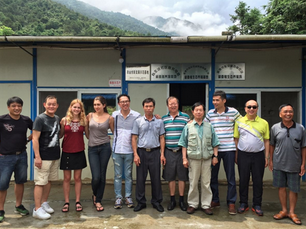 Business trip to the North of Guangdong

Two interns in Zhuhai, Alizée Ville and Alice Roberts, interning at a biochemistry company, were recently given the opportunity to travel to the north of Guangdong province. On 28th-29th June their manager Wesley invited them to visit two farms in the Guangdong countryside which were to become suppliers for his new restaurants. Here’s how they got on whilst they were away.
Day 1:

After a long drive, our first stop was at a restaurant where they served us famous Chinese chicken and the ‘best bamboo root in china’. The bamboo root was freshly cut and cooked so it lacked the strong smell that not-­so-­fresh bamboo roots give off. It is common in china to serve the heads and tails of any meat and fish, so it was new to see chicken and duck head on the plate. We also tried unfertilised chicken eggs before they are shelled.

We then visited Mr Lai’s office, which was in a traditional style building by a large lake. When we arrived, we spotted a calligraphy table, where we practiced some Chinese writing (書法 Shūfǎ) and were taught how to hold the brush. Calligraphy can be considered an art form in China.

During this trip I have realized the importance of tea in social gatherings and business meetings. It is used as a symbolism of hospitality and is the first thing presented on arrival. When we arrived at Mr Lai’s office, he had a beautiful table made specifically for “Chayi”, the art of drinking tea. The water was boiled on a hot plate built into the table and used to clean the china, and then the remaining water was poured over a small porcelain four faced Buddha’s head (supposedly representing Brahma Hindu). The tea was a mix of green tea leaves and herbs, which Mr Lai took pride in. While the tea was served, I noticed a common courtesy was to tap two fingers on the table, near your cup, as a way of saying thank you.

During the tea ceremony, the atmosphere is very friendly and casual. I have noticed that Chinese business culture differs to western, as friendly talk is mixed with business talk, rather than having strict meeting schedules. After a while, a poster of a proposed theme park map was shown to us and it was explained that around the lake, Mr Lai and his colleagues are planning to build a theme park.

We spent the night at the Lilac Garden Hotel, in Qingyuan, by the Bei River. Home to four million people, the city is growing alarmingly fast, with new high rising residential towers being built everywhere.

That night, we were invited to dinner on a boat restaurant, where we were served freshly fished seafood. The place also raised ducks and geese, so all the meat and fish couldn’t have been fresher. During our dinner, men from our neighbouring table were even fishing while they were eating. We were introduced to Chairman Xie, leader of the Agricultural Board of the Qingyuan district, whom joined us for the festivities. We were then served Fei Xia Ye, a special locally made rice liquor, which is sipped during the meal. Strong, it also has a floral aftertaste.

The morning of the 29th we drove to the chicken farm that planned on supplying Wesley’s new restaurant. To get there, we had to climb up a hill, despite it being one of the easiest ones to access. Once we reached the top, we saw a chicken pen but no chickens. These chickens were so free range that they were able to roam the hills without fences, so much so that we were not able to see one. As these are free range, they eat whatever they find in the hills so they are not guaranteed to be organic, however the farmers in this area are not educated on how to use fertilizers and pesticides so they do not tend to use them, making the chickens most likely organic.

We did not stay too long and were soon back on the road, to visit an organic piggery. Situated in Donghua (near Yingde), Mr. Zeng Fanwei’s farm hosts domestic Tibetan pigs. Tibetan pigs are (quite obviously) native to Tibet, from around the Brahamaputra river, which is elevated at about 3500 meters. These pigs are thus comfortable in high altitudes and prefer wide pastures, which is why they seem to strive in the Donghua area.

The pigs are kept in age groups, starting at 3 months old (the younger ones being kept with mothers until they are weaned), and acquire bigger pens as they grow. The older ones are allowed to roam freely in the mountain. Being an “Ecological Agricultural Science and Technology” company, the pigs are raised in respect to organic norms and humane treatment.

After lunch and lychees at the pig farm, we started our journey back to Zhuhai. However, within 300 metres, one of the tyres burst and we were all stuck in the Chinese countryside. After a few complications, and some tea at the neighbour’s house we were able to get to a garage and fix it. While driving back we saw lots of beautiful countryside and passed over Guangzhou’s huge industrial harbour. 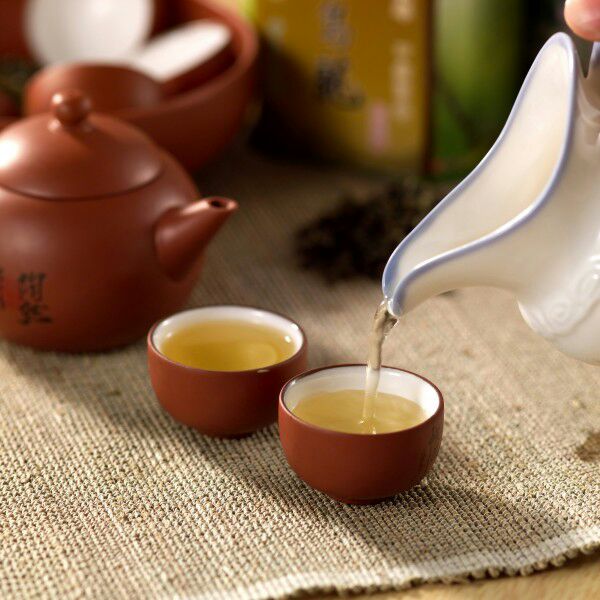 The Chinese tea culture has a very long history. As early as 2000 years ago, ancient Chinese people from Bashu area (which is now mainly Sichuan and Yunnan Province) started to plant and make tea. The process of making tea is still similar to that of the old times, and many Chinese people still regard drinking tea as an indispensable part of their daily lives. Like their ancestors, they enjoy drinking freshly brewed tea to alleviate fatigue and return to “their true and peaceful mind”.

The process of tea making:

For the traditional tea ceremony, Chinese use a teapot, a tea pitcher, several tea cups and saucers, a  “Cha He” (similar to a strainer), a teaspoon, boiled water, and most importantly, good quality tea leaves.

Step One: The teapot is “cleaned” with boiled water to get rid of the “off-flavor “of the tea pot.

Step Two: The tea leaves are shown in the “Cha He” to guests to let them examine the leaves. Afterwards, they are put into the teapot with a teaspoon.

Step Three: The teapot is emptied of the warming water.

Step Four:  The teapot is filled with the proper temperature water which causes the tea leaves to spread out in the pot and develop the tea aroma.

Step Five: The tea water from the teapot is poured into the tea pitcher to prevent the tea aroma from vaporizing.

Step Six: The tea water is poured into small tea cups, filling them to about 70 %.

Step Seven: Tea cups with saucers are served to guests. Now is the time to drink the tea.

Before Chinese drink a freshly made tea they carefully watch and smell it. Social etiquette is to smile at the person who made the tea to show appreciation to him/her.

Good tea tastes soft and smooth, is fresh and clear, and without a peculiar smell.

Chinese believe that, as a person lets the tea taste linger in his/her mouth, he/she will get a sense of peace from deep inside his/her mind. At this point, all fatigue, stress, and anxiety from work and life is said to pass away.

Interested in Chinese culture? Find out more about our programmes here.

My trip to Chongqing

After my visit to Jiuzhai Gou National Park a couple of weeks ago, I took the train directly to Chongqing and traveled for about 3.5 hours. The high-speed train takes only 2 hours, but since April 4 is “Tomb Sweeping Day”, many people travel around and I was not able to buy a high speed train ticket.

Chongqing is a large and flourishing mountain city. I stayed for three nights at the home of a friend I met online. She took me for a lot of great local food and gave me a great introduction to the city in only two days.

The first day, after she took me for some local spicy sweet-potato noodles, I took the metro to Ciqikou Old Town. The tea houses in Ciqikou are very famous in Chongqing so I really wanted to experience the tea lifestyle there. I also found that they have many local snacks and some very special street food. Ciqikou is the best place to try local food and buy gifts for friends.

The second day, I went to meet another friend at the touristic center of Chongqing, Jiefangbei. They have lots of shopping malls around and a very famous food street. After a quick lunch with my friend, I went back to my host’s home. That afternoon, her American flatmate drove me around the city on his motorbike and we even went to the peak of Chongqing.

After such a beautiful day, the fun continued: I went to a BBQ party with my friends, at a house located inside a university campus on the peak of the mountain.  This is the best place for a night view of the city. I enjoyed the beautiful night view, drank some Shancheng beer and had some great BBQ. I felt like I didn’t want to leave Chongqing!

I have been to many places in China, but I can honestly say Chongqing is one of my favorite cities. I like the street life, always lively, I never saw an empty street. I also like the friendly people, the great food, the relaxing tea culture and the traditional and internationally mixed city. I hope I can go back soon!

Want to learn about the best places to visit in China? Come to Zhuhai for an internship and get first-hand tips and stories from Sunny! Apply now or email us for more information.

I went to a host family with Study China Programme participant Anna last night, and had dinner with the family, our intern Pierre came to this family almost 2 months, every time I called the host family, they always told me what interesting things they did and how happy they are. I think this  is the most interesting thing from my job. I feel really very happy.
Before the Study China Programme participants came, I felt so nervous. Since february, I started to visit families, then select families for students. Most of the families are first time host students, I always scare they could not get along very well. But now when I see the 16 families and 16 students are both so happy for their unique experiences. I feel everything is worth!

Here are some pictures, they also invited some friends and relative to their home yesterday, we made dumplings and had dinner together. Because the husband of this family Mr Li is tea lover,  so we drunk some tea together after dinner.