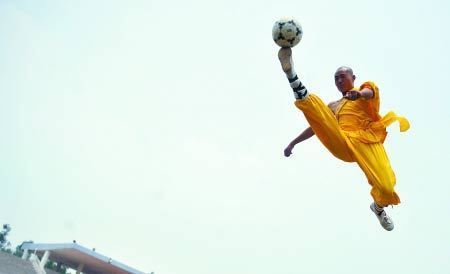 Before coming to China I expected Kung Fu (功夫 gōngfu) to be omnipresent. It just seemed so obvious to me, having learned everything I know about China from Crouching Tiger, Hidden Dragon and Kung Fu Hustle. In retrospect that was probably not the best way to get to know the true Chinese culture. However, upon arriving at my host family my host brother immediately asked me if I played football (足球 zúqiú). I soon realised that football is in fact the most popular sport in China (real football, not the American kind). Nonetheless, I was undeterred and I tried to find a place to do Kung Fu. However, my road to success was made even more difficult by the fact that every time I asked someone where I could find a Kung Fu gym they said just go to one of the football courts and play some football. In the end I found a Kong Fu gym, but I was intrigued by the enormous popularity of football, despite the lack of international success at this sport.

So I researched and what I found surprised me. Not only does FC Barcelona have a training facility in Qingdao, the city I was placed in by InternChina, but a football academy has been set up in a Shaolin temple with the intent of incorporating football into Kung Fu. Yes, you read that correctly Shaolin Soccer is now a real thing. On one hand, the school is trying to increase the reputation of Shaolin Kung Fu on and increase the football skill of the citizens. On the other hand, they are combining the physical prowess the monks gain through rigorous training with the precision required to be a good footballer.

In fact this is all part of an effort to raise the standard of the national sport, because although it is the most popular sport in China, the national team is spectacularly bad. I was forced to witness this when watching international friendlies with my host family at dinner. The women’s national team is comparably good on the other hand, reaching the quarterfinals in the last world cup albeit receiving much less public attention. This success is probably a result of football being introduced into the curriculum from a very young age. Previously, talents did not receive the attention they needed in order to prosper into the potent footballers they could have been due to being occupied with school all day all week up to the age of 16. When this problem became apparent though, football was incorporated into daily school life and many schools now have football grounds.

This national initiative to become better at football, promoted by the eager football fan and president of China Xi Jinping, also consists of an increase in transfer funds in order to secure top players in the Chinese Super League, the top tier football league in China. Much of the money probably comes from wealthy businessmen trying to amass political power and general reputation – corruption is a big problem in Chinese football, too. In the 2016 winter transfer window the Chinese Super League spent more than the Premier League. This is more than the Bundesliga, Serie A, La Liga and Ligue 1 leagues combined on transfers last year, to record sum of £194 million.

Not all of the money was spent domestically but big clubs also tried to secure international top players. The striker, Alex Teireira, Liverpool’s top target for this winter’s transfer season, was indeed snatched by Jiangsu for the Asian record fee of £38 million. Among the pantheon of world class players recruited this year are names such as Jackson Martinez (£31 million), Ramires (£21 million) and Brazilian striker Elkeson (£13.9 million). Each of these transfers successively broke the record for the highest transfer fees. Cahill, Demba Ba and Gervinho already call the Middle Kingdom home. Oscar was offered £75 million to join Ramires’ Jiangsu, but decided to stay at Chelsea (with Jiangsu he would at least have a chance of winning a trophy this year). The high salaries also add to the lure of the Chinese Super League. Asamoah Gyah earns £243,000 a week, which made him the 8th highest player at this point in time.

At the moment most top players are South-American mainly due to the millions they are offered in China. As they are chiefly from poor families they do not care much for the prestige of the European league. This is very different in Europe where football players are not only chasing the next pay check but also the glory that is so deeply embedded in the football culture. For this reason European players only tend to leave Europe when they are approaching retirement whereas many South-American talents are going to China early on. South-American players near retirement are more likely to go to China, whereas European ones prefer destinations such as the USA. This is likely change, as Xi Jinping has announced that China would be a major footballing nation by 2025 and Rooney, Fernando Torres and Yaya Touré have all been linked with China.

The interest is bilateral though and top clubs such as FC Barcelona have opened academies in China, trying to turn quantity into quality. Some of the biggest European clubs, such as Atletico Madrid are now partially owned by Chinese billionaires who have gained interest in the European football hype and want to secure some of that footballing glory for themselves. Xi Jinping is reportedly a huge ManU-fan (god knows why).

Considering all these different factors China has the potential to become a major player in international football. This is not limited to the clubs though, but it also includes the national team that is ever-improving. I guess only time will tell, but definitely look out for China in the next few years! You might have to buy plane tickets to China in the next few years as Xi Jinping has voiced interest in hosting (and winning) a World Cup.