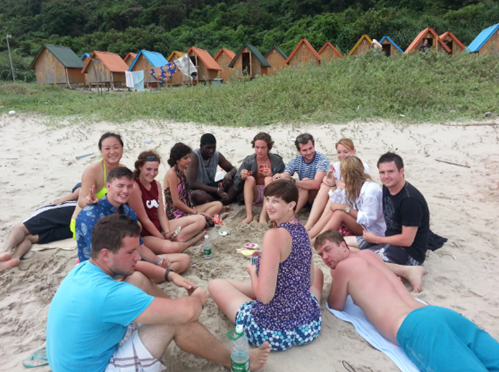 This weekend the Zhuhai InternChina office arranged a trip to Hebao island! It was an incredible island with sandy beaches and great water to swim in. We’d been concerned leading up to the trip because it had been heavily raining in Zhuhai all week. Luckily, when we got to the island we had good weather and were able to swim and even catch a tan!

After a long walk carrying all our camping equipment to the beach, we couldn’t wait to get in the water! As soon as we’d dumped our stuff on the beach we ran into the sea and stayed there for hours. The strong waves made it a lot of fun, (I was completely taken out by waves on numerous occasions!!)

When we’d finished playing in the sea and sunning ourselves on the beach it was time to set up the BBQ. The food was amazing! We sat around the BBQ eating and having a few beers which was so relaxing. It was also a great chance to get to know some of the new interns and hang out as a group.

When we woke up in the morning we were exhausted! A whole day of swimming and partying had taken its toll! However, what better way to freshen up than a morning swim in the sea?

We swam in the sea all morning before it was time to head home. It was definitely a good trip and I was glad that I’d been able to visit one of the hundreds of islands that surround Zhuhai! The only downside is that I’m now in agony from sunburn… but that is totally worth it for the amazing weekend we had!

Would you like to join Jack in Zhuhai? Apply now for the following internships!