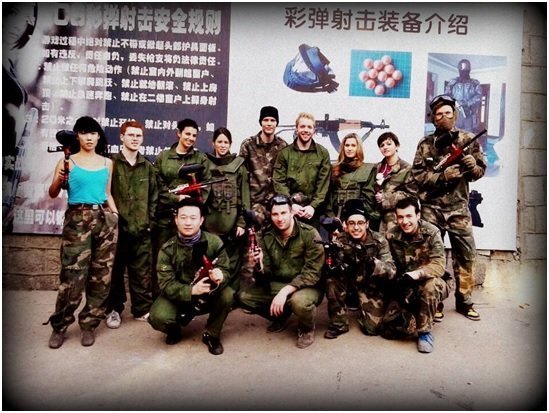 Qingdao Blogs, Qingdao InternChina Events, Things To Do in Qingdao
Posted on 21/03/2014

I love the smell of paint in the morning.
Hey everyone, this will be my account of the paintballing event we held in Qingdao last weekend, I hope you enjoy!

We set the meeting time at a modest 12pm to try and adjust for hangovers, this did not work for everyone. Three people were out of the battle before it even begun, with Qingdao’s nightlife to blame. 😛

After a quick lunch and bus ride to the north of Qingdao, our merry band of 14 arrived in a mountain park to find the paintball arena.

Usually in the west, paintballing is held in the woods in a very cordoned off area with purpose built huts etc. But in Qingdao paintballing is more like a warzone, here an old derelict complex of 2 story buildings was used… Health and safety officials would cry! But it was AWESOME, looking just like a scene from a computer game!

After we got suited , booted and armed with 200 bullets we set off into the fray for the first game – one team would go into the buildings and hide, the second team would attack.
I was heading up the attacking team.

Remembering all the good battle movies, I split my team up so that we could surround our adversaries and swarm through the buildings. Stalking through the rubble I edged closer to the enemy, hugging the walls and feeling very SWAT-like as I swung around corners and cleared areas. All was quiet and I could hear the defending players whispering in the distance. I could smell their fear…

Shots suddenly starting echoing through the complex followed immediately by screams of players being redecorated, I pressed on in a pincer movement looping around the back of the enemy to pounce. I found their stronghold, went prone and crawled in on my belly, firing one shot straight between the eyes of the first person who spotted me, the others still unaware of my presence I dived through an old window, parachute rolled and took out another opponent cracking 3 paintballs into his visor quickly grabbing his gun as it fell blindly from his grasp… Bang Bang, I stood in the doorway behind the rest, rattling off a cloud of bullets with both guns, paint covering the walls leaving man shaped silhouettes. With the smell of emulsion in my nostrils I had taken out 4 more, sparing no one in my wake ……. Ok OK, actually that wasn’t how the first game went down at all…
1 minute into the game I was ducking down below a window, rising up to take out a player with 2 shots to the torso.. then realizing it was one of my own team, amidst my apologies I got shot right in the forehead and was out of the game…

For the rest of the day we rotated through the areas and played capture the flag, 2nd floor assault with shields and a Mexican standoff.
One of the interns was also celebrating his birthday so we organised a rat run for him… he had to sprint from one end of the pitch to the other whilst we all stood in a row like a firing squad but with one bullet each… he was so fast he only got hit by one, lucky!

Battered and bruised we finished the day by going for a big hotpot meal with beer, comparing battle scars and telling tales of heroism and courage.

Thanks for a great day guys! Looking forward to going back again in summer with a new set of interns!

Join us for the next ‘Call of InternChina’! Apply now for a summer internship!