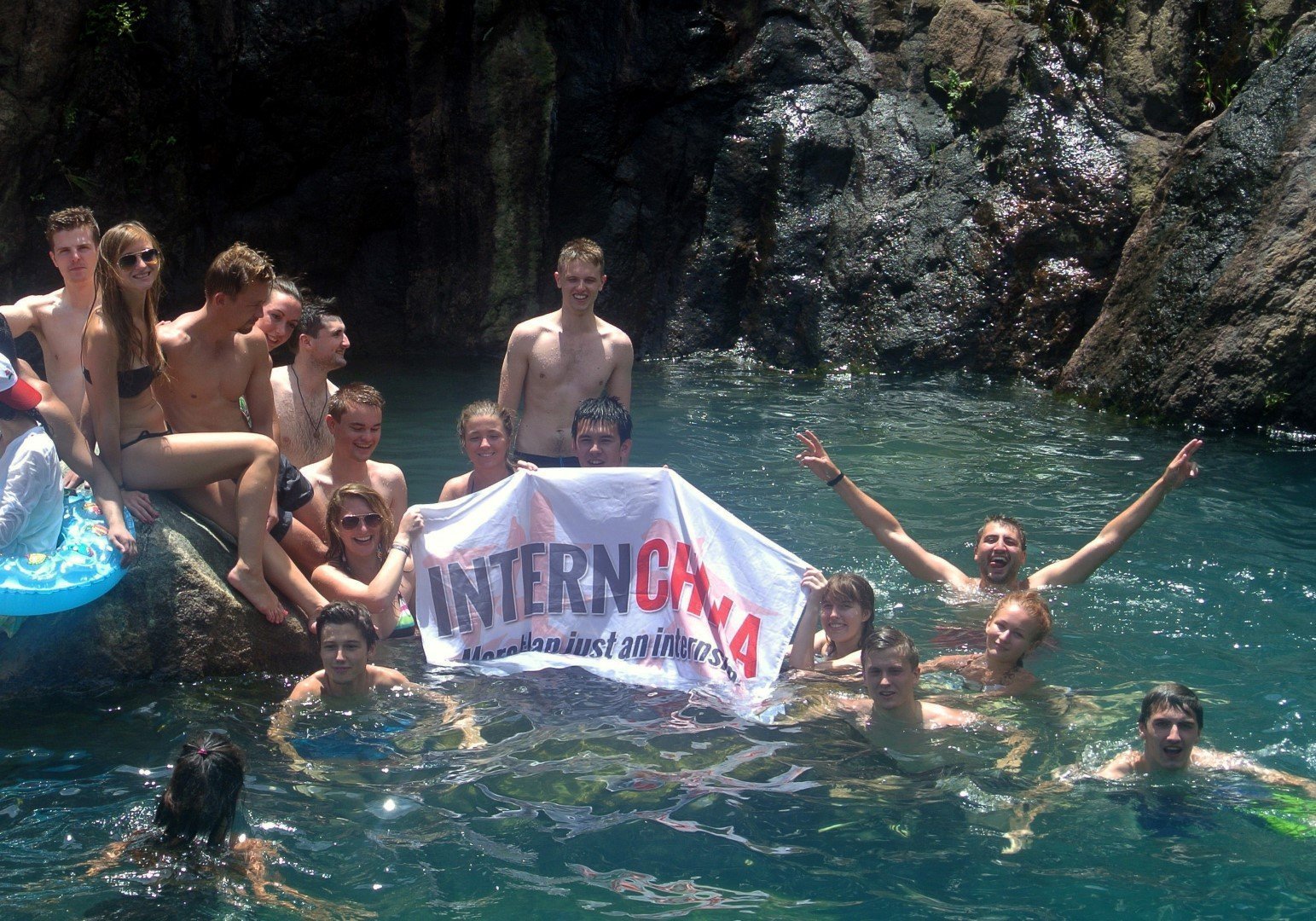 An adventurous Hike to a Waterfall

On a Sunday, two days after my arrival in Zhuhai, I joined a day trip organized by one of the other IC office interns. I was told it was going to be a one hour bus drive and a one hour hike until we would reach a waterfall where we could go for a swim. By that time I did not know how amazing this trip was going to be.
At 10:00 in the morning we got on the bus to a town called  金星村, which is close to a mountain called 黄茅田 (or here the Google maps address: Sheng Dao, Taishan Shi, Jiangmen Shi, Guangdong Sheng).

We were a group of twenty enthusiastic interns who could not wait to see this supposedly beautiful waterfall. So we got off the bus, put sunscreen on, and started hiking.
After five to ten minutes of walking, the hiking track became quite adventurous. We strode through little streams, jumped from one stone to another, walked through bushes and had to be careful while walking along some pretty steep hillsides… oh and not to forget about all the Chinese paparazzi who came along and wanted to take selfies with us!

It was very hot and humid that day. Accordingly, we were melting in the sun until we finally reached the swimming hole. Within seconds, all of us jumped into the water to cool off. At last we then knew that the hike was totally worth it. The view from the top was stunning and we stayed for the whole afternoon.

And after that… well… we had to go all the way back to the town where the bus had been waiting for us. It turned out the way down was even more challenging than the way up. We had such a good time and it was a great opportunity for me to get to know the interns in Zhuhai. Even though I still had a jetlag, I’m very glad I joined the group that day..

If you also want to experience the real China and get working experience, apply now! 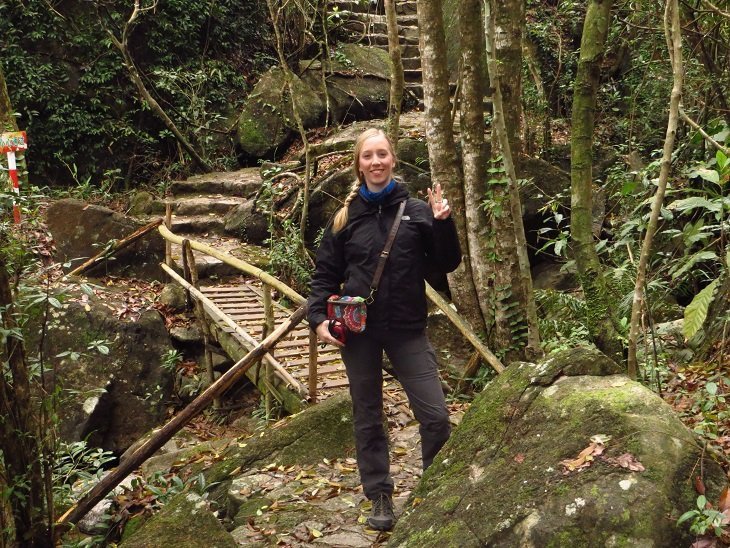 Hey there,
Wow, another week just passed by. Time flies! Unbelievable! I finally found my routine in the office and work is becoming more fun but I still learn more and more new things. On Friday for example we visited some companies. First time for me, wearing business clothes and having fun while being serious. Having put the first fear aside it was exciting to enter this unknown territory. Guess we all grow up after all.

Last weekend we went on a trip to Xinfeng about which Jenny told you in her latest blog. It was an interesting weekend, during which I got the chance to get to know the other interns that went with us a little better and also learned a little more about myself. I feel like it has been a week where I have learned more about myself. I will not tell you too much about the detailed program as Jenny will do that in her blog on Thursday – so don’t miss that one. 😉 But I still want to tell you about some things I experienced.

Starting with Friday evening on which we went to a restaurant near our apartment: As so often, the menu was written in Chinese and I just asked the waiter which of the dishes does not have meat in them. He pointed at some and I chose blindly one of them. What I got were noodles in a peanut sauce. They were delicious! So, I had them again yesterday.

The next morning we started our trip to Xinfeng. First stop was Sakura Valley where all the cherry trees were in bloom and then we headed to the hot springs to recover from the day.

Sunday morning I began with my favorite Chinese breakfast: 肠粉 (cháng fěn). It is made of rice flour, egg, salad and some soy-like sauce. I love it!

Then we headed towards the mountain which we wanted to climb. On the way there we already passed many tree covered green mountains. The one we went to had its peak covered in clouds. After we got off the bus and took some group pictures with some random Chinese people we started our hike.

The nature was breathtaking beautiful – all green and small rivers making their way around huge rocks. From everywhere you heard waterfalls rushing down the mountain and had an awesome view over other mountains and the landscape around them.

This scenery made me and my co-hikers hungry for more so we decided to go for the peak. We noticed that 1,400 meters is pretty high for a mountain that does not have any steps to help us climb it. On our way we met three other crazy people who had the peak as their goal.

As it became more slippery and steeper the higher we got, we had to use roots and trees as a help – surprisingly no one tripped. When the mist from the clouds got so thick that we could not see into the distance, we started expecting the peak to show up around every corner but we were let down every time. Just when we thought we were the last ones on that climb we met a group of Chinese women who then told us it was one more hour to reach the top. As we were all totally exhausted and it was time to get back to the bus we gave up on the peak and made our way downhill. This was partly more difficult than the way up. But with some helping hands of another Chinese hiking group we finally made it to the stairs. From there it was just an easy walk back down to the bus.

This trip was a really awesome experience. It had everything from fascinating nature at the foot of the mountain to a thrilling hike in the upper part.

On the drive back to Zhuhai everybody was sleeping on the bus because we were so tired.

It was a really nice weekend.

Gianna aka Gini aka 吉娜

Apply now for an intership and join us in the activities organised by us!