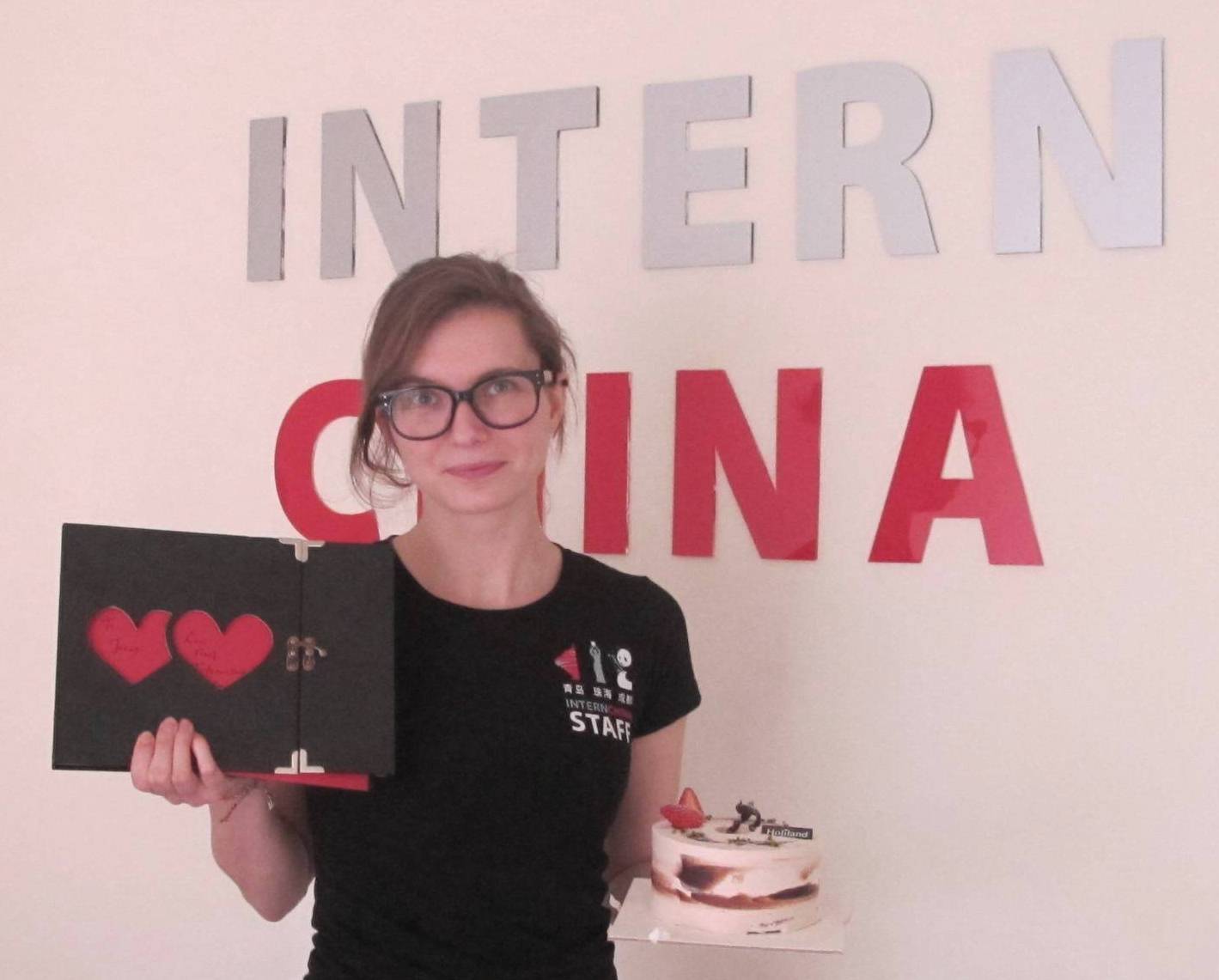 All good things come to an end… goes a saying. When I arrived in China the first time in 2009, I was a student. I had booked an internship with InternChina in Qingdao for 5 months – not really sure what to expect! The internship description was relatively vague but sounded like a good challenge and I was supposed to live with a Chinese family. What would it be alike? I was confronted with a mix of feelings: curiosity, excitement and a bit of anxiety.

When I got out the airport in Beijing the first time, it was freezing cold. Middle of March the temperature usually still ranges around zero in North China. I got my warm coat out of the suitcase, did all the sightseeing, gained a lot of new friends and after five days I was ready to move on to Qingdao.

I went by fast train and it took me five hours. I will never forget how I arrived in Qingdao: a beautiful sunny but cold and windy day. My first day at the host-family was strange: because it was early afternoon only the grandma was at home, watching TV having her feet on the couch table and making jiaozi. She was laughing at me because I didn’t understand her Yintaihua on the first day! I kept sitting on the couch and offered my help, trying to follow the Chinese soap operas on TV – but useless – of course I was a guest, so no chance to help.

In the evening I got to know the rest of my family: my 12 year old brother and my host-parents. It was overwhelming, they were so nice and curious (but shy) to get to know me.

My first weekend in China was already filled with peculiarity: my host-brother convinced me to eat a  table-tennis ball sized (!!!) fish eye and I was friendly offered a fork in the restaurant when I accidentally dropped an oily peanut with my slippery metal chopsticks.

My first internship day I will also never forget: I decided to walk along the beach for an hour to the office – it was a great choice: streets were not too cramped with cars, so the air was fresh and clean, the sun was shining and fresh breeze blew along the seaside.

Qingdao was showing itself from its best side! However, finding the office ended up in an odyssey and when I finally arrived at InternChina I was warmly welcomed by the whole team who was expecting me already. Not knowing that this is the same place where I would come back two years later!

Well, what shall I say… five months internship in Qingdao went by quickly. I used another two months to explore the rest of China and went to Xi’an, Chengdu, Guilin, Hongkong, Xiamen, Suzhou, Hangzhou and Shanghai – it was a breathtaking trip full of joyful moments. I left China with millions of beautiful memories, lots of new friends and the offer to come back any time.

I took this chance after my graduation and started working for InternChina in Qingdao as an office manager in 2011! Later, I moved to Chengdu to take on a new responsibility by setting up the third office for InternChina!

It always has been a rewarding time – my last three years with InternChina were filled with the most beautiful, the saddest and the most exciting moments in my life. I grew personally, professionally and surely emotionally. Three years China definitely left a mark on me forever, I will never forget how crazy, contradictious and beautiful this country and its people are!

To InternChina I am just grateful for giving me the chance to experience such a great opportunity of growth and success, for meeting so many awesome people and seeing so many exciting places.

Leaving China is at least as emotional as starting in China: I am ready for a new adventure in my life but I am leaving with a mix of feelings again: curiosity, excitement and full of gratitude!

If you also want to work for InternChina, get to know us through an internship or homestay! Contact our team  and apply now! 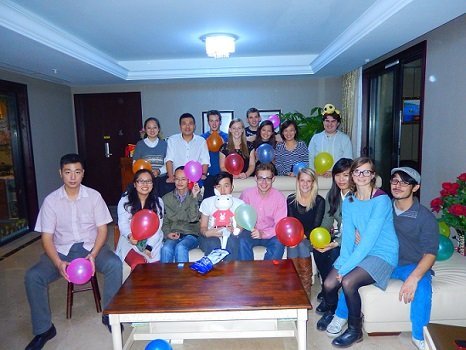 Celebrating my Birthday in Chengdu

Growing older happens not only too fast, but it can also be pretty exhausting especially if you are abroad for your birthday.
My birthday celebrations started on Friday when I partied with some of my InternChina friends. We went to a huge club area in Chengdu where we enjoyed some free drinks with many Chinese people. Club-hopping was amazing but we were out till about 4am. So I was able to catch some sleep until noon the next day.

I was a bit surprised that my host-family did not wish me “Happy Birthday”. Later though it turned out that it was only a cultural misunderstanding. In China birthdays are usually not given special importance until your 60th birthday. Bearing this in mind, I was happy they ignored it since my 60s are still some years ahead of me. Although they did not congratulate me, they invited my friends to come over to our flat for a party. During the day my host-sister Sophie was preparing hand-made cupcakes, milk tea and biscuits as well as rearranging the furniture to make sure all my 20 international guests would fit.

It was not only a birthday party but also an International Food Feast. Every intern as well as every Chinese guest brought one home-made dish and we shared all the international food: Bangers and Mash, Chicken Wings, Spaghetti Carbonara, American Pizza, Schnitzel, Bratkartoffeln, more mashed potatoes, Chinese vegetables, fried Jiaozi and dessert. I totally enjoyed having all this delicious food at the same time.

After dinner someone started blowing up balloons. It was lovely and colourful to begin with and distributing them all over the room reminded me of childhood birthday parties. Somehow the balloons found their way all around our living room landing on people and food. Soon the peaceful party took a different turn when people started throwing balloons at each other. Thankfully no one was seriously injured during the balloon fight =).

After the party I skyped with my family in Germany and went to bed already excited for Sunday, when we had decided to see the Giant Buddha of Leshan.
It was a terribly busy but amazing weekend. Since I am leaving tomorrow I wanted to say goodbye and thank all my new friends here in China. Hope to see you soon!

You want to meet new people or celebrate a birthday party in China? Apply now for an internship in China and enjoy unique moments!

Some of you might know Leo our terrorist 🙂
As InternChina is expanding, with a new office in Zhuhai, it has to be occupied by staff too…
Now the bad news for those who will stay in Qingdao…
Leo is going to leave to Zhuhai and he won´t come back…
Everybody is very sad about it, because Leo is one of the nicest and most helpful people I ever met and I imagine the others think the same as me.
Even if he was very busy, he took his time for the people who needed him and helped them first – even in situations like the following one 😉

On Thursday Leo organized a last good bye dinner at a very delicious Korean restaurant and we had a really good time there, but afterwards when everybody slowly started to recognize that Leo won´t be there at the office the next day anymore, the atmosphere got calmer, as Leo became a friend to all of us in this short time.

I wanted to wish Leo in the name of InternChina and all of the other interns all the best for his path of life and hope he will be happy at the new destination and the new surroundings there.