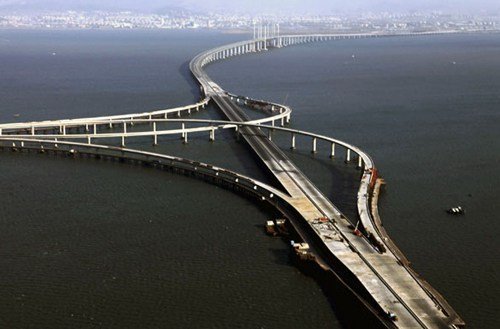 Did you know that China´s economy is currently growing by 9% every year? In comparison countries like Germany, Europe’s biggest economy, or the USA have only been growing by approximately 1% during the same time. China´s economy has in fact been developing extremely fast for the past 25 years. It is estimated that by 2020 the Chinese economy is going to dominate the world market. So what effect does this effect have on Chinese cities?

Let´s take Qingdao as an example; a city located at China´s east coast and with more than 6 million inhabitants the biggest city of Shandong province. Once a German colony, Qingdao has come a long way from oppression to playing an important role in international business, which is not least thanks to its favorable position at the East China Sea.

Today, Qingdao has a major international seaport as well as a naval base, the world´s longest bridge and several high tech industrial areas.In 2008 it proudly hosted the Beijing Olympic Games for sailing, as well as the 2013 and 2014 Sailing World Cup.

At the Global Ocean Summit held in Qingdao in February 2014, Qingdao Consensus on Sustainable Development of Future Oceans was declared, which demonstrates the city´s aspiration to achieve an environmental friendly status and also underlines its aim to play a leading role in marine economic development. Every year the city also attracts students from all over the world to study at one of the more than 28 colleges and universities, the biggest of which are Ocean University of China, Qingdao University including International Business College and University Medical College, Qingdao University of Science and Technology and Qingdao Agricultural University. During the past couple of yearsmore than 10,000 top professionals from overseas have been drawn to the city.

Qingdao´s industrial areas do much in supporting the city´s export output and development. The West Coast New Economic Zone hosts several important technological parks like the State-level Economic and Technological Development Zone, the Sino-German Ecological Park and the China-Japan-ROK Innovation Industrial Demonstration Park. The government aim is to reach a GDP of 500 billion yuan ($81 billion) in 2015 alone; by 2020, they expect it to exceed as much as 1 trillion yuan. Another industrial zone, the Hongdao Economic Zone, aims to become a major investment centre for high-tech companies.
But Qingdao not only attracts professionals and business investors but also tourists from all over the world, many of which come to the city during the summer months, the best season to enjoy sailing, swimming,  sunbathing and to taste the delicious seafood.Events such as the Qingdao International Beer Festival held every summer, which is hosted by the Tsingtao Brewery, the second largest brewery in China,also help much in promoting the city´s status as tourist destination.
In light of this fast paced development, it is almost certain that the city has a very promising future ahead and can expect further growth and investments in the coming years.