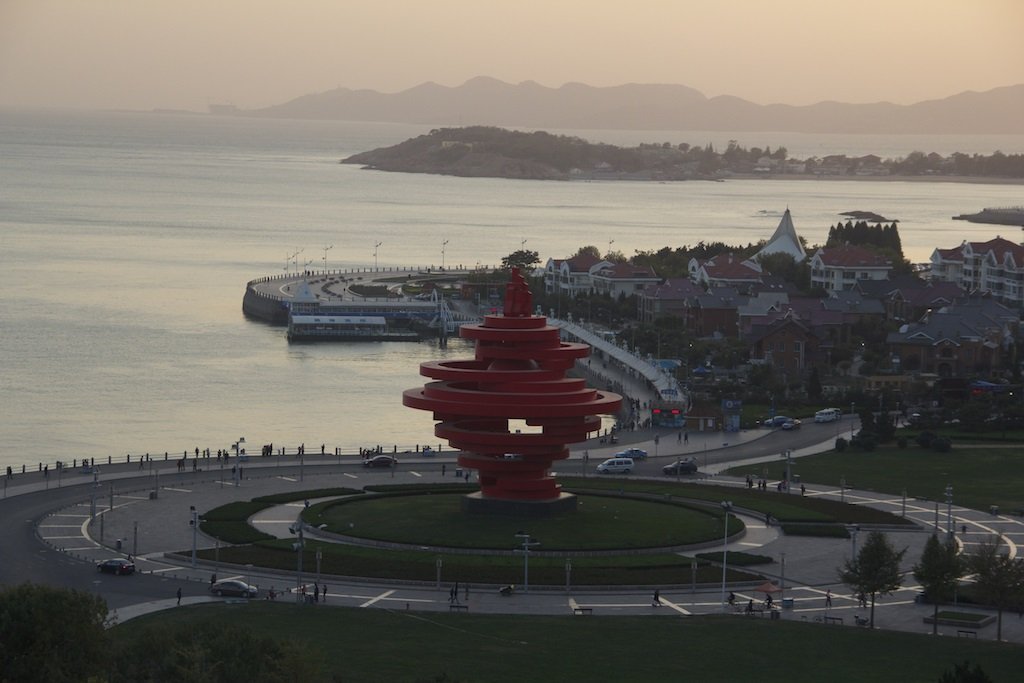 Before your stay, How-to Guides, Internship Experience, Qingdao Blogs, Qingdao Eating Out Guide, Things To Do in Qingdao
Posted on 29/10/2013

This week I am finally having my first visitors from home. My mom is coming to Qingdao for a short week. And before she arrives, I had so sit down and think about all my favourite places that I want her to discover. Not as easy as one might think, since Qingdao is huge and I only have 4 days to introduce her to the city I already fell in love with.
Here is my list of sights that no one should miss during their time in Qingdao:

Located right next to our office the May Fourth square and the modern area around it is one of my favourite places here in Qingdao. It is named after the May Fourth Movement, a nation wide cultural and political movement that started in Qingdao. The best time to go is on a sunny afternoon when the air around is filled with lots of colourful kites.

The whole area around the Olympic Sailing Centre is definitely worth a visit. With an area of 45.000 square meters being reconstructed and built up for the Olympic games in 2008 the whole costal area around Marina city is the most modern one in Qingdao. I love the long pier with the flags of every nation that lead to the little light house from which you can enjoy the view on Qingdao’s skyline.

If my visitors make their way to old town, I want them to discover the two famous churches. The Catholic Church and the Christian Church.  Once you had your first glimpse on the architecture it is hard to believe that you are still in China.

The Ba Da Guan District is next to the beautiful costal area of Qingdao. It is the former residential area of the Germans and quite small with eight streets only. Latest by the time you escaped the big city and find yourself wandering through tree alleys next to nice architectural buildings Qingdao will have you captivated.

But of course Qingdao has not only nice architecture and the sea to offer. There are lots of possibilities to spend your money on nice things. A Fake market in old town for Prada bags, New Balance sneaker, sunglasses and whatever you desire, the unique night market at Taidong and my favourite little market next to Crowne Plaza where I buy Zara clothes for a quarter of the real price if I am lucky.

But its not only the shopping for clothes, bags and shoes that my visitors have to experience. The shopping for food is quite an adventure itself. My favourite place to buy food in Qingdao is the little market on Dayao 3 Lu, next to where I live. The mass of fresh vegetables, sweet fruits, delicious meat, and freshly caught fish is hard to describe and definitely needs to be discovered by them.

Even though these nice sights are a good start to introduce my beautiful Qingdao to visitors, there is so much more for them to discover. And 4 days could never be enough in such an amazingly diverse city.

Do you want to discover Qingdao and its surroundings? Apply now for your internship in China and become part of the InternChina community!

Qingdao: Getting to know the German Side

Hi, this is Stephan again from Qingdao. It has been a wonderful first week with InternChina in my new city. China is crazy, but in a positive way. Everything is different from Europe. The people, the food, the traffic. I love the beach and the wonderful sea here in Qingdao.

I got to meet a lot of interesting individuals this week and there are just a lot of impressions I have to process right now. What is also very interesting for me as a German guy, is that there is a long German history in Qingdao. Surprisingly, before me some Germans have already been here and they had quite some influence on the region around Qingdao.

In 1898, Germany forced China into giving them 553 square kilometers of land in Northeast China for 99 years. It happened after the killing of two German missionaries, this gave the military a reason to launch an offense in northeastern China. The most important city in this region was the city of Qingdao. This era lasted until 1914 when Japan was able to force the Germans out of China.

Today you can still see some influences of that past time. A lot of houses still resemble German architecture and there are a few churches that look exactly like a church back in good old Germany… Impressive!

You also can not forget the world famous Tsingtao Beer. The Tsingtao Brewery was founded back in 1903 and since then its beer has made its way all around the world. There is no better way to enjoy the Qingdao beach in the evening and drink a cold Tsingtao beer.  Ganbei!

Apply now for an internship or send us an email for more information.

Last weekend was my first time visiting the ‘Old Town’ and was not sure what to expect… hopefully I will give you a little introduction into what to search for there!
First thing to do is get to ZhanQiao (Qingdao’s grand pier), you can easily reach here by taxi or bus (228 for example from opposite Carrefour).
Zhan Bridge has many other names such as Qianhai Zhan Bridge, Nanhai Zhan Bridge and Grand Pier. Located at the coastal area at the southern end of Zhongshan Road, Zhan Bridge is an extension of the road into the sea.

Originally built in 1891 as a naval pier, Zhan Bridge is as old as Qingdao City. During the Qing Dynasty, the imperial envoy Li Hongzhang once came to Qingdao to inspect the local development. At that time, Qingdao was just a small fishing village, which couldn’t house the big official ship of Li Hongzhang so the pier was built.

Back then the pier was small. But now, Zhan Bridge is a famous scenic spot thanks to the renovation in recent years. It is 440-meter (1444-foot) long and 10-meter (33-foot) wide with giant granite supports. Lotus-shaped lamps provide illumination and decoration. At the south end of the bridge is a Chinese style octagon pavilion standing in contrast to European buildings in the background

From here we walked up the road to find St. Michaels Cathedral..

This huge Cathedral is located in the oldest part of Qingdao, at 15 Zhejiang Road, on the east side of Zhongshan Road in Shinan District. Built by German missionaries, the cathedral stands at the top of a hill in the center of the old German-built part of the city. It is the largest example of Romanesque Revival architecture in the province, resembling a German cathedral of the 12th century… Worth a visit… even just to see all of the pre wed couples having their photos taken in the square in front.

Just down the road is Ji Mo Lu.. this is where the fun starts because this awesome centre of shops is home to a whole range of interesting, counterfeit designer goods and novelties, where bartering is the name of the game.
Spanning at least 5 huge floors you can find pretty much anything for pretty much any price!
So, if you want to get the right price then follow my foolproof steps –
Jacks sacred six step plan to haggling:
1. First choose the item you like, check its quality, then ask the vendor how much it is (duo shao qian?)
2. Politely laugh at the price they tell you.
3. Offer something around ten percent lower than what you would be happy paying for it, which coincidentally will probably be ten percent of what they originally price the item at! This way you will have a bit of wiggle room.
4. You will then be locked in to the ancient ritual of the haggle where the vendor will most likely huff and puff, moan and tap at the calculator saying all the time that this is their best price. You will be repeating ‘tai gui le’ for good measure.
5. Do not be fooled. Be cheeky, smile and don’t take it seriously. To get the very best prices you will need to pretend to slowly walk away at least once.. twice to boot 😉 all the time saying ‘dui bu qi.. zai jian’
6. With a bit of luck, the vendor will chase you and agree to the lower price and the deal is done.. sometimes though you may just be left walking away. But then you just keep your head up and go to the next stall.. which is most likely selling exactly the same stuff and the game starts again 😛

Hope you enjoy these sights, there is so much more to see in Old Town so I will keep you updated on my adventures there!