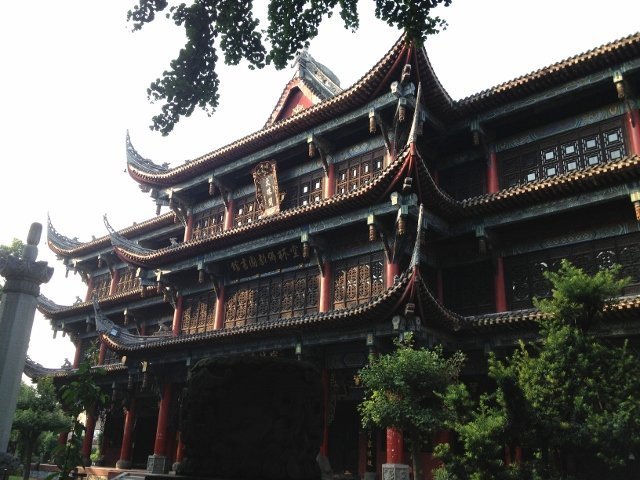 A Journey through Chengdu – Wenshu Temple

For the average Chengdu resident it probably is not the most interesting thing, but for the foreigners, especially those who are ready to explore, Chengdu metros might be one of the first things, which they may become curious about. Therefore, we present you a series of metro stations in order to introduce Chengdu in an approachable way.This week, we want to introduce you the Wenshu Monastery!

Wenshu Monastery (Manjushri Monastery), located at Exit K of Metro: Wenshu Yuan. It is the best-preserved Buddhist temple in Chengdu.

In 1681, Cidu, an accomplished Buddhist monk came to the temple. He built a simple hut between two trees and for several years lived an ascetic life there. According to legend when Cidu was being cremated, the statue of Wensu (Bodhisattva Manjusri in Sanskrit) appeared in the flames, staying for a long time. So people regarded Cidu as the reincarnation of the Bodhisattva Manjusri(Wenshu in Chinese). Thereafter, the temple is called Wenshu Monastery.

Cultural relics are the highlights of Wenshu Monastery. Since the Tang and Song dynasties, over 500 pieces of painting and calligraphy by celebrities have been stored here.

In addition to its cultural relics, Wenshu Monastery is famous for its exquisite garden and solemn halls. Tourists and locals can also enjoy vegetarian food in the Buddhist Restaurant while listening to music by folk artists.

Therefore, it is a perfect place to explore the ancient China and have traditional dishes in a 14 million city like Chengdu. We are looking forward to take the entire InternChina team there!

Going to Chengdu will be a great experience. Look for an internship and apply now.