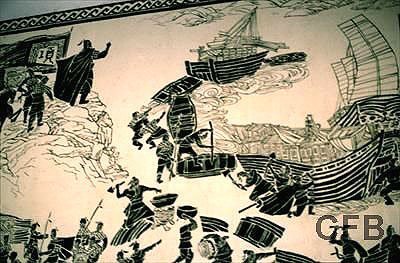 龙飞凤舞 – The Dragon flies, the Phoenix dances..
On first glance, Chinese can seem like a very linear language – the grammar is simple enough, and learning all the characters and vocabulary seems to be the hardest part. Until one delves further into the literary world of the language. Chinese characters are already complicated in themselves, almost like miniature works of art, however Chinese is also peppered with abbreviations, wordplay and set phrases or proverbs – the Chengyu 成语.

These are four-character phrases, which at first glance can seem nonsensical or completely irrelevant in the sentence, sometimes as if they have been put together at random. But almost every Chengyu originates from an ancient story or saying which usually carried deeper meaning.Most Chinese idioms have their roots in classical Chinese – the written form of Old Chinese – such as works of Confucius, Mencius or other renowned philosophers, or simply folk tales.

Here are some examples of Chinese Chengyu:

破釜沉舟 Pò Fŭ Chén Zhōu – ‘break the cauldrons and sink the boats’. This idiom implies that one pulls through with their plan without looking back, without allowing retreat. It stems from a battle account from the last years of the Qin Dynasty. The general Xiang Yu led an army far inferior in number to their enemy’s, however he gave his men courage in ordering them to sink their boats and destroy their cooking pots once they crossed the river. Hence, the soldiers resolved to fight to their deaths. On the day of the battle, however, Xiang Yu’s army defeated the enemy and captured the general. Therefore this idiom can only be used in successful scenarios.

水滴石穿 Shuĭ Dī Shí Chuān – ‘water drops pierce stone’. This Chengyu describes perseverance, implying that so long as one does not give up, one will achieve their aims. This saying originates from a story of the Song Dynasty. The official Zhang Yong found out that one minor official had taken a coin from the counting-house and so had him questioned. The arrogant official protested that he did not deserve any punishment for taking just a single coin. Zhang Yong was furious, stating “A coin every day, A thousand in a thousand days. The tree branch is felled from the stress of a rope, and the stone is pierced by dripping water.” Consequently the official was beheaded by Zhang Yong himself.

Some Chengyu also have English equivalents, for example 璞玉浑金 — Pú Yù Hún Jīn , meaning ‘uncarved jade and impure gold’, similar to the saying ‘diamond in the rough’. 血浓于水 – Xuè Nóng Yú Shuǐ, which translates to ‘blood is thicker than water’.

There are about 5000 different Chengyu in the Chinese language, each with their own unique story and lesson to teach. So make sure you do not ‘pull up the sprouts to make them grow’ (揠苗助长)* and follow the ‘wise man who looks after himself’ (明哲保身)**.

* To ignore the principles of natural development, to blindly pursue instant success, so that ultimately you spoil things.
** Smart and well-informed people know enough to avoid dangerous situations and preserve themselves.

Intrigued by the Chinese language? Want to experience Chinese culture first hand? Then join us for an internship and Apply Now!