Nĭ hăo! Wo shì Shona and I’m the Design and Marketing intern at the Chengdu office, although my journey started further east, in Qingdao. I was lucky enough to begin my programme with IC working in the Qingdao office, which I was very happy about, as Qingdao is a beautiful city and right on the sea so there’s always a nice breeze to help with the heat. 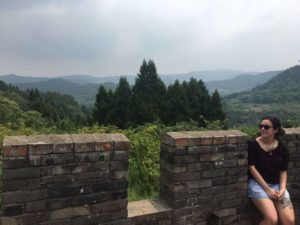 
What I loved most about Qingdao is that it’s a great introduction to real-life China, and as the IC offices are based in cities most tourists don’t think of, it’s an opportunity to fully immerse yourself in the culture. Due to Qingdao’s history, there’s a real European feel to the city; however don’t let that fool you- the mass of markets and restaurants remind you that it still is, very much Chinese.

Settling in to China life was pretty easy for me, and while the first week was a bit of a shock- such as getting used to the commute to work (I’m still amazed how many people can fit on a bus here), the culture shock passed quickly. It’s incredibly easy to get used to the lifestyle and turn into a true Zhōngguó rén. 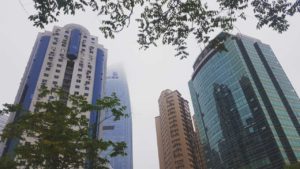 I really enjoyed the lifestyle in Qingdao; there’s always something interesting happening, and despite how fast paced it seems initially, it also feels as equally laid back.

The work/life balance in Qingdao is just right and my favourite post work treat is winding down at the local BBQ spot with some Shao Kao and Tsingtao in hand- now that’s the life!

While in Qingdao I had the chance to help organise fun events each week, my first one being sailing! What better way to experience a Chinese seaside city than by boat? It was my first time running an official event, so I was a little nervous but the event ran without a hitch and everyone had a blast.

One of the best nights I’ve had in China was camping on the beach, at the foot of Mount Làoshān; the real highlight was floating around in the sea, surrounded by friends and all watching the fireworks light up the night, and moments like that are why I love China.

The first big Summer trip was a joint excursion to Beijing with the Chengdu, Qingdao and Dalian IC offices, and being my first trip in mainland China, I was so excited to see the China I’d seen in movies growing up as a kid.

We saw iconic landmarks such as the Forbidden City, the Summer Palace, and the icing on the cake, the Great Wall. It’s safe to say I wasn’t disappointed as Beijing has so much to offer, but the pinnacle of our trip was visiting the Great Wall at Mu Tian Yu.

Three weeks into my internship I was lucky enough to have the opportunity to travel to Sichuan to help support my colleagues in the Chengdu office. I had always wanted to visit Chengdu and love to travel so when the chance arrived, I jumped at it! 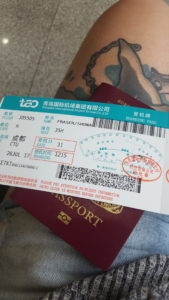 Travelling to Chengdu was exciting; even the legendary Chinese flight delays, which gave me the opportunity to make friends with the locals using my broken Mandarin, couldn’t dampen my mood as I headed to panda city.

Arriving in the Sichuan capital, I was lucky to have a few days off before starting work. So what’s the first thing you HAVE to see in Chengdu? Pandas! The panda base, or Xióngmāo jīdì as its known here, is hugely popular with tourist groups so it’s important to get there bright and early.

After waking up at the crack of dawn, I jumped in a cab that took me straight from my apartment to the base for 60 kuai, which was worth it just to beat the queue.

July in Chengdu is the peak of summer and with average temperatures of 30 degrees, and with it being so hot outside the pandas were hidden away in their cool enclosures. This meant I had to fight my way through the tourist mob to catch a glimpse of the famous bear cat, but it was worth it- after all, pandas are an icon throughout the world so I couldn’t pass through Chengdu without stopping by!

Life in Chengdu was a bit of a shock at first, especially the morning commute to work. Chengdu feels like a combination of the fast paced lifestyle of cities like London with bustling subways and seas of people, along with the easy going nature of the Chinese locals, sat playing Mahjong on the street at night-  a contrast if there ever was one.

Since coming to Chengdu I’ve been involved in all sorts of IC events, from the weekly Thursday dinners eating famous hot pot to the Four Sisters mountain trip in western Sichuan. When staying in Qingdao I used to think it was the city that never sleeps, however since coming to Chengdu, I’ve realised what life really is like in a busy Chinese city.

Here in the hub of China’s “Go West” policy, there’s always something to do, somewhere new to explore, and it’s the perfect mix of culture and business. I’m looking forwards to what the next two months bring here in Sichuan.