Going to Shenzhen: A how-to guide!
For all the people coming to visit Zhuhai, there are certainly a lot of interesting cities and places nearby. Of course there is Hong Kong and Macao, as well as Guangzhou, which all are amazing places with colonial history. As most people know Macao was a former Portuguese colony and Hong Kong belonged to the British colonial empire. Guangzhou also has a rich history of French and British concessions in the 19th century. While these cities are certainly very interesting and unique, few western people know about Shenzhen.

Have a look at this bird-eye video of Shenzhen!

Zhuhai is basically the mainland Chinese sister of Macao, located directly at the Macao border. Shenzhen on the other side of the Pearl River Delta is the mainland sister of Hong Kong. Shenzhen has become one of the fastest growing cities in Asia as well as one of the youngest cities in the whole world. In the year 1979, there were merely about 30.000 people living in the city. Today there are approximately 13 million people living in this fast expanding metropolis. Shenzhen is also becoming more and more like a Chinese version of Silicon Valley. Most Software and Technology companies have their seat in Shenzhen and the majority of the Chinese technical device production is located near Shenzhen. Actually, most of the technical devices you own probably originated there. It is an incredibly young city which attracts young skilled workers from all over China. So if you come to Zhuhai for an internship, make sure to pay this awesome city full of hustle and bustle a visit. 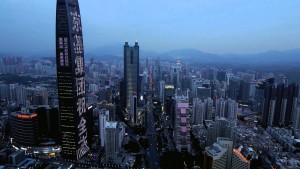 How to get there?

The most convenient way to travel from Zhuhai to Shenzhen is the ferry from Jiuzhou port. The Ferry usually arrives every 30 minutes which makes travelling very comfortable and the ticket price is 115 RMB, also not very expensive.  Make sure to watch our video tutorial for taking the ferry following this link. The staff at the ticket counter usually speak English, but if you are not sure that they understand you, just show them these Chinese characters蛇口港站.

You can review the ferry schedule here.  Also check out our video tutorial about travelling to Shenzhen clicking here.

Once you arrive at Shenzhen Shekou port, there is a metro station right in front of the port that can take you directly into the city center. Make sure to have some 1 RMB coins or 5 RMB notes, because those are the only ones that work at the ticket machines.

Another possible way to go to Shenzhen is via the bus, which is a little cheaper but takes a lot longer than the ferry and is not as convenient.  Have a look at the schedule and prices here. There are several bus stations in Zhuhai, so you can select a bus station that is near your accommodation.

If you have any questions about planning your travels during your internship with us in China, do not hesitate to contact our staff and we will gladly help you.