As a foreigner who’s lived in China for over a year and a half now, I wasn’t really sure what to expect heading into the unexplored territory of Japan. The history of both countries is a complex chain of conflict, but despite this they still share cultural roots that can be found in aspects of Chinese and Japanese language, food, architecture and religion. In a way I experienced a different form of culture shock landing in a country that’s so different to China and yet in some ways still similar.
First of all, I left the airport after a 3-hour flight and stepped out onto the Japanese streets which are so incredibly neat! The lanes are painted on the roads so precisely, not a speck of paint out of place. Everyone waits at the red light whether in a vehicle, on a bike or on foot and the cars always stop for pedestrians, even when they have right of way. When the lights turn green pedestrians are urged on their way with nice tinkling music. Stranger still, only once in my entire time there did I hear the honk of a car horn. Traffic can be a little crazy in China, so this was the first big difference that struck me.

Secondly, everywhere I went there was a confusing mix of what I recognised as Chinese characters (actually Japanese Kanji) and the Japanese alphabet (Hiragana). This lead to quite a few misunderstandings, mainly me trying to guess the meanings of things and discovering I couldn’t have been more wrong. Not being able to speak a word of Japanese is quite a struggle, especially when asking for directions. The Japanese can be quite shy when foreigners approach them and start babbling away in English. 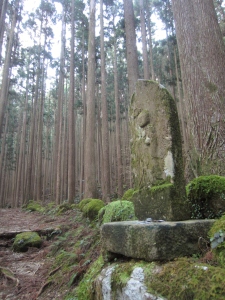 However, I did not stay in the city for too long instead I plunged straight into the depths of the Japanese countryside to discover one of the country’s oldest pilgrimage trails, the Kumano Kodo, a trail worn down by the footsteps of several dynasties of emperors (or rather the footsteps of their palanquin bearing servants) and thousands of devoted Shinto followers. This is where I began to recognise some of the similarities between China and Japan.

Traces of age old religious devotion in both countries can still be found today in the Daoist mountain trails of places like Emei Shan (Sichuan, China) just like the Kumano Kodo (Wakayama, Japan). Although essentially based on different religions you can see the similarities in traditions in both countries. Shrines built by devotees dotted along the paths, the remains of ancient rest stops and tea houses and legends of the families and pilgrims who’ve been along the same route centuries ago. 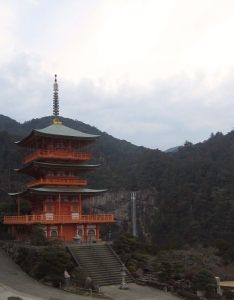 In the modern day most visitors are more like tourists than pilgrims but the essence of religion has still been preserved. The temples in both China and Japan bear traces of decorative similarities too: roof shapes, gold leaf, leaf and flower motifs and the incense burning at every entrance. The dedication keeping these places alive make them a real haven for travellers.