This weekend at Intern China Chengdu our team went to Dufu Cottage followed by a relaxing afternoon of Mahjong and Tea drinking. 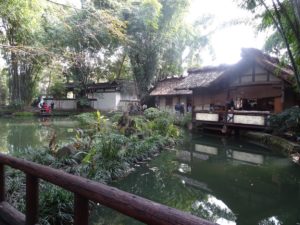 Dufu is a very famous Chinese poet born in the 7th century. He resided in Chengdu for 4 years during the AnShan Revolution which led to him fleeing from his home town of LuoYang in Henan province. During his time in Chengdu he lived in a modest thatched cottage by the flower rinsing shores of the river in the west of Chengdu.

It is here he is said to have been most prolific in terms of his output of poetry, writing over 240 poems. Taking in the scenery in this beautiful area of Chengdu it is easy to see where he got his influence and motivation for writing such an great number of poems. 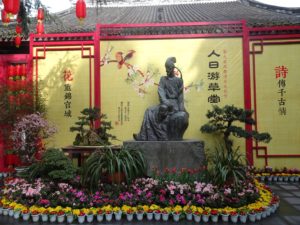 In the grounds of Dufu’s Cottage you can see a wide variety of blossoming plants as well as a wide range of classic architecture and buildings. Including the famous hut by the river where Dufu would spend his days gazing over the river watching the wildlife.

After walking the grounds at the cottage and getting some fantastic Sichuan food for lunch we headed to a Mahjong house near to WenShu Monastery.

When arriving at the Mahjong house we chose a room with a view over the street, in hindsight this probably wasn’t the greatest idea. This being my first time playing I was amazed by the table at which we were playing. It had an in built shuffling device, contained two sets of tiles and also an under table heater to keep our feet warm.

After being taught the rules by the rest of the IC Chengdu team we began to play. Let’s just say it didn’t go too well for myself but we were having fun. 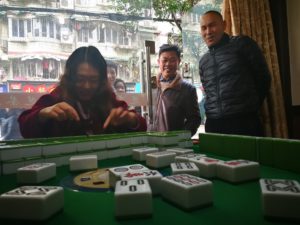 During our time playing the passing locals seemed shocked and amazed at the foreigners playing Mahjong. Asking if we knew how to play, taking photos. One gentleman even took it upon himself to stand by our table for 20mins offering instructions. Including getting animated if any of us were to do one thing even slightly wrong.

All in all it was a great day out, relaxing enjoying 3 hours of Mahjong and the serenity and tranquility of Dufu’s cottage made for a great Saturday in Chengdu.