The Chinese National Day on 1st October is seen as the anniversary of the People’s Republic of China. On this date in 1949, the Central People’s Government formed with the help of Mao Zedong, celebrated with a ceremony on the Tian’anmen Square (天安门广场). However, the exact founding date of the PRC was the 21st September 1949.

The National Day marks the first day of one of the two Chinese Golden Week holidays. The Golden Week (黄金周) gives Chinese people the chance to travel or visit their family because of the seven continuous days of holiday. Officially three days of paid holiday is provided, but these three days are extended by bridge holidays. Working on surrounding weekends compensate these bridge holidays. The intention of the government doing this re-arrangement is not only for the Chinese people. Primarily it should stimulate the Chinese tourism industry which is steadily growing.

Famous tourist attractions, popular travel destinations, airports, trains and hotels crowd with Chinese people. Everyone wants to use their limited free time for travelling and visiting the country in which they are living. So, for travel during the Golden Weeks, less popular destinations are recommended or be prepared for long waiting times for popular tourist areas. 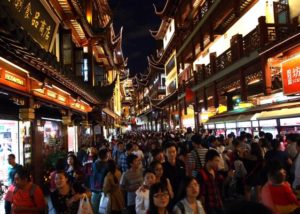 There are several traditions and activities when celebrating the National Day. Throughout the whole country they are relatively similar, even in Hong Kong and Macau. There are many different shows like dance, song and light shows. There are flag raising ceremonies by uniformed troops like in Beijing on the Tian’anmen Square, military reviews and parades. In the evenings there are fireworks everywhere. Red lanterns, banner scrolls, Chinese flags and portraits of Mao Zedong, founding father of the PRC, decorate all public places ostentatiously.

To demonstrate the Chinese public worship of the founding father of the PRC the portrait of Mao Zedong at Tian’anmen Gate Tower in Beijing has changed every year since 1949.

The Chinese government sponsors all these activities, shows and decoration because they express the patriotic feelings of the Chinese people towards their fatherland.

During the Golden Week, government offices and factories  often close for several days. However, shops, malls and sights are open. They profit the most from the Golden Weeks because people have time to spend their money.

So, enjoy the new impressions of another kind of busy China and don’t spend too much money! Have a nice free week! 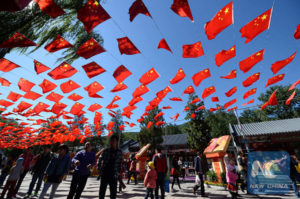