Chengdu, home of the Giant Panda, mouthwateringly spicy cuisine, and the World’s largest building is a cultural, economic and social hub of Western China. As the capital of Sichuan province, it is emerging as one of China’s breakout cities with immense investment in infrastructure, real estate projects and high tech manufacturing and IT services. Over 100 of the world’s top 500 largest corporations have a presence here, including Intel, Sony, Toyota, Motorola, IBM and Nokia.

Located in West China, Chengdu is the starting point for many wonderful excursions into Western Sichuan and The Tibetan Plateau. With direct flights to France, Germany (Frankfurt), UK (Heathrow) and U.S. (San Francisco) it is everyday becoming a more and more influential place, drawing attention away from the East coast cities, seen by the recent G20 financial summit held here in July 2016.

This famous saying is surely due to the relaxed, outdoor and sociable lifestyle that Chengdu is famed for across China. Despite being a huge metropolis with almost 15 million inhabitants it maintains a charm from previous years that up-and-coming cities do not, shown in it being voted China’s most livable city (China Daily, 2014).

Chengdu lies to the East side of Sichuan province in South-Western China. It is located at the western edge of the Sichuan Basin and sits on the Chengdu Plain. The city is flanked by the steep Longmen Mountain and in the west by the Qionglai Mountains, which exceed 3,000 m, as you move towards Tibet. Its’ varied climate and topography is partially what attracts so many visitors, as one moment you can be sweating buckets in Chengdu, and almost the same day find yourself shivering on windswept mountains. 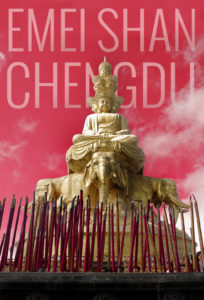 Sichuan offers beautiful and fascinating day and weekend trips from Chengdu. Of these, the stunning Jiuzhaighou national park is surely the most famous, where Jet Li’s 2002 epic Hero was filmed. Closer to Chengdu you have the Leshan Giant Buddha and the sacred peak of Emeishan. Further to the West you have the opportunity to gain an insight into Tibetan Sichuan with areas such as Kangding and Tagong real highlights. In fact as you move towards Tibet you quickly become aware of the differences between the two cultures, and in some way you feel as if you are entering a world completely different from the rest of China. The huge city of Chongqing, to the East of Chengdu and home to the spiciest hotpot in China, is also well worth a trip, and can be reached in under 2 hours by high-speed rail.

Getting in and out

Chengdu Shuangliu International Airport is around 20km outside of the city-centre and recently became one of the top five busiest airports in China. From here there are 2 main buses into Chengdu city, the #1 and #2 buses both costing ¥10. Taxis can also be taken from here and generally cost around ¥45, however you can arrange for an InternChina colleague to pick you up for free.

Chengdu is connected by train to most major cities such as Beijing, Shanghai, Kunming in Yunnan, Chongqing and Xi’an. The Chengdu railway station is the main stop for getting in or out of Chengdu long distance, although there are also many trains running to and from Beijing, Shanghai, Guangzhou, Chongqing, Changsha, Nanning etc. at the East Railway station also. Lastly, the recently opened South Railway station runs many high-speed trains including the Mianyang – Leshan line. Here you can pick up trains mainly to other parts of Sichuan or close, but you can also get to major cities such as Shanghai and Beijing from here.

Although it’s not always sunny in Chengdu, the city enjoys a pleasant sub-tropical environment for most of the year. A short, cold and dry Winter is followed by a warmer, more comfortable Spring, a sweaty, humid summer with the occasional thunderstorm, before a cooler and pleasant autumn lasts well beyond the October national holiday. 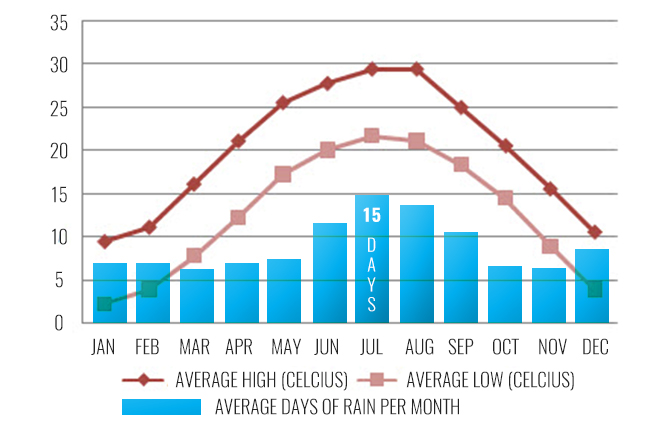 The annual average temperature in Chengdu is about 16 C (61 F), influenced by the subtropical monsoon climate of the Sichuan Basin. The hottest months have to be July and August, with highs reaching 37 C (99 F). The coldest temperatures are in January, sometimes even dropping to around -6 C (21 F).

Chengdu is one of the four famous cuisines of china, and remains a Chinese culinary capital and foodie heaven. Dishes tend to be pungent and spicy due to great use of garlic and chili as well as the Sichuan peppercorn, which is málà (“numbing and spicy”).

(Tofu in a Bean curd sauce with mince and chili oil): one of Sichuan’s most iconic dishes, served at most big restaurants. It consists of tofu placed in a spicy chili and bean-based sauce, and often accompanied minced meat, usually beef or pork.

When people think of Chengdu, its’ famous hot-pot (huo-guo) usually comes to mind. Introduced from Chongqing, Chengdu hotpot has its own unique style ranging from numbingly spicy to more milder and aromatic, using three or four different types of spices, as well as a fish head hotpot, amongst many others. Eating hotpot is a great social event for many locals, and a must do while you’re in Chengdu.

Eating Sichuanese staples is often your best bet in Chengdu, since you can pick up a delicious bowl of niu rou mian (beef and noodles) for under 12 kuai almost everywhere, however other delicious Asian cuisines as well as good western food can be found here easily.

Chengdu’s history runs very deep. It is the earliest settlement in all Southwestern China and has a recorded history of more than 2,300 years, although there is even evidence of humans living there over 4,000 years ago. The city’s name has always remained unchanged and since its foundation it has been the capital of Sichuan. Its’ geographical location in the fertile Chengdu Plain has proven extremely beneficial to people throughout history, hence its’ title as a ‘land of abundance’.
For more ideas on what to do in Chengdu, check out our ’48 Hours in Chengdu’ blog.

About 40 kilometers northeast of Chengdu, Sanxingdui remains a wonderful Archaeological Site and has artifacts dating as far back as 5,000 years ago. It is the largest museum in southwest China, with a large number of rare pieces. The exhibitions in this vast museum date back to the Bronze Age, covering a wide range of items, such as jade articles, gold objects and stunning bronze masks. Also displayed amongst the treasures is the world’s oldest, in tact, life-size standing human statue, which is 260 centimeters tall and weighs around 180 kilograms, a great sight in itself. Best way to get there: direct bus from Xinnanmen (New South Gate) to Sanxingdui Museum at 09:30. Price: CNY 50.

Found in Chengdu’s Southern suburb, this temple is dedicated to Zhuge Liang, of the Kingdom of Shu in the Three Kingdoms Period (AD 220 – 280). The temple is one of Chengdu’s major tourist attractions and contains some flawless statues to Emperor Liu Bei, Zhuge Liang and other officials of the Shu Kingdom, complete with famous Chinese tablets and ancient inscriptions. The surrounding area is also worth a visit; near the exit of the temple is Jinli Ancient Street which is a hive of activity and much delicious street food, and opposite is the Chengdu Tibetan quarter with many authentic Tibetan businesses and shops. Best way to get there: easy to get to from within Chengdu, just take buses: 14, 26, 53, 57, 213 or 214. Price: CNY 60.

Essential to Sichuan and Chinese culture as a whole are pandas, a national treasure. The panda base is located on Futoushan Mountain in the northern suburbs of Chengdu, around 10 km from the city-centre, and can be reached by taxi in about 35 minutes. There is a museum displaying panda habitats, there are also scientific displays that give visitors a good idea of their characteristics and distribution in the wild, as well as some info on conservation and breeding efforts. The pandas themselves are a brilliant site but should always be visited in the morning between 8:30-10 am, during feeding time, since during the heat of the day they will often sleep. Best way to get there: take the newly opened metro line 3 to panda avenue!

While you may also hear more standard Mandarin spoken in Chengdu, especially amongst the younger generation, many people’s native tongue is the local dialect – Sichuan hua. This dialect evolved due to a great wave of immigration during the Ming dynasty: many immigrants, mainly from Hunan, Hubei, Jiangxi and Guangdong, flooded into Sichuan and brought their languages with them creating a melting pot. Sichuan hua is spoken by over 100 million people, and so if counted as a national language rather than a dialect, would rank 10th among world languages by number of speakers. Many disagree over exactly how different this dialect is from standard mandarin, however it seems for most learning mandarin to be reasonably distinct. For example the words for “four” and “ten” are often confusing, as Sichuanhua for “four” is often impossible to distinguish from Mandarin for “ten,” and vice versa. Nonetheless, standard mandarin in Chengdu is of cause understood by almost everyone you will meet and after a little time acclimatizing to the city, local accents can be understood.
Sichuanese is one of the most uniform dialects in all of Inner China. However, it is possible to divide Sichuanese into four sub-dialects according to slight differences in tones.

So, overall do not underestimate the usefulness of standard mandarin, which will still be understood by almost everyone, and even being able to say a few words make your life much easier in Chengdu. Language classes can be arranged through the InternChina office. 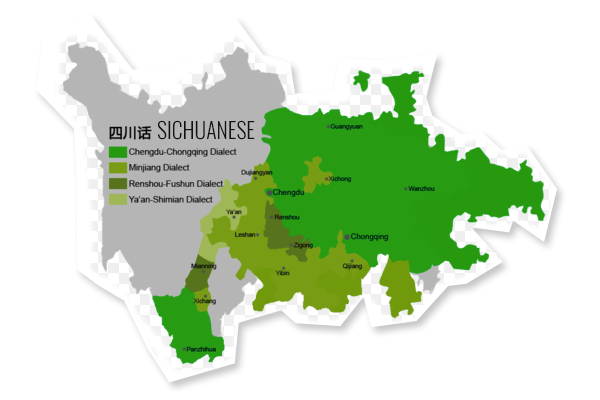 READY TO BOOK YOUR PROGRAMME IN CHENGDU? HIT THE BUTTON BELOW!

OR IF YOU WANT TO READ ABOUT OUR OTHER CITIES… CLICK ONE! QINGDAO / ZHUHAI / DALIAN