UNESCO World Heritage Site and one of the four holy mountains of Buddhism in China, Emei Shan owes its name to its two peaks which in fact look like the delicate eyebrows of a Chinese classic beauty. And a beauty it is! This mountain is home to a large range of wildlife including numerous birds, trees and the mountain´s infamous monkeys; apart from that there are also many sacred temples, monasteries and beautiful pavilions. Locals have a saying that “Emei Shan is more than a mountain; it is a frame of mind.” If you are in Chengdu and have the chance to visit the 3,099m high giant be sure to take it, I promise you won´t be disappointed!

Originally I had planned to hike up the mountain with a friend for two days but as it is so often in life something came in between very last minute so my friend unfortunately could not make it and I was too busy to go for two whole days. So I decided I´d go by myself and stay only for one night. I left Chengdu on a Saturday afternoon at around lunchtime, went to one of the local bus stations and bought a ticket to Baoguo, a village situated at the foot of the mountain. Baoguo is about 150 kilometers away from Chengdu and it only takes 2 ½ -3 hours to get there. As soon as I arrived in the village I went to look for Teddy Bear Hotel, a hostel conveniently situated right next to the bus station which had been recommended to me by friends who had found it to be a very nice and clean place with friendly staff. I could not agree more and due to the fact that it was low season, getting a room was fairly easy even though I had not booked beforehand.

Since it was only three a clock when I got there and I still had a couple of daylight hours left I decided to visit Baoguo Temple which is situated a mere ten minute walk from the hostel. The 8 RMB entrance ticket allows visitors to stay as long as they like and explore the temple grounds including various buildings and courtyards, all of which are stunningly beautiful. It is a really peaceful place where many Chinese people come to pray and pay their respects to Buddha, kneel down in front of golden Buddha statues, light incents and breathe in the peace and quiet of this sacred place. Visiting the temple was a very humble and rewarding experience and I can only recommend it to anyone planning on visiting Emei Shan!

The next day I got up in time to catch the seven o´clock bus to Leidong Ping Bus Station from where I wanted to walk to Qingyin Pavilion and from there to the Golden Summit. At the Pavilion I met a group of Chinese girls who asked me where I was headed and if I was travelling alone. When I told them that indeed no one else was travelling with me they invited me to join them and hike up the rest of the mountain together, an offer I was only too happy to accept. Their English was about as basic as my Chinese but somehow we managed to keep a conversation going and the many misunderstandings and explanations made the experience all the more lively and exciting. Very often you do not need words to express feelings or meanings! When the Chinese girls offered to buy me lunch at one of the various food stalls on the way up to the summit I knew that polite refusal like I would have shown back home in Europe was not the kind of reaction they were hoping for. So I accepted their invitation and we had some delicious snacks. I have only been in China for a month now but I find Chinese people to be extremely friendly and welcoming. Inviting a stranger they have only just met for lunch, offering help and advice without a moment´s hesitation and showing genuine interest in learning more about you and your home country, all this is very much part of the Chinese culture and it makes you feel welcome and appreciated.

After about two hours of climbing up stairs we finally reached Jindǐng, or The Golden Summit, and thanks to the fact that the weather was absolutely lovely (at this point it should be noted that according to the weather forecast it was supposed to be raining nonstop) we were able to enjoy a breathtaking view across the Himalayan mountains, magnificent temples and colourful Tibetan banners flattering in the wind. After spending an hour or so at the summit, exploring different sights, visiting various temples, a giant Buddha statue and a couple of souvenir shops, we made our way back to Leidong Ping Bus Station. Close to the station we saw some monkeys lingering around some picnic areas for the first time during our adventure. I had heard a lot of stories about Emei´s aggressive monkeys before I went so I was nervous they might try to steal our belongings but if you remain calm and do not throw stones at them as I have seen many Chinese tourists do there is no reason to worry. Leave them alone and you´ll be left alone by them, it is as easy as that!

Soon it was time to say goodbye to my new Chinese friends who were staying at Emei Shan until the next day but since they also live in Chengdu we are planning on meeting again soon. Visiting Emei Shan has been a truly unique experience and even if, like me, you are only able to stay for one night it is still totally worth it and nothing you should miss out on.

If you also want to experience the “real China”, APPLY NOW! 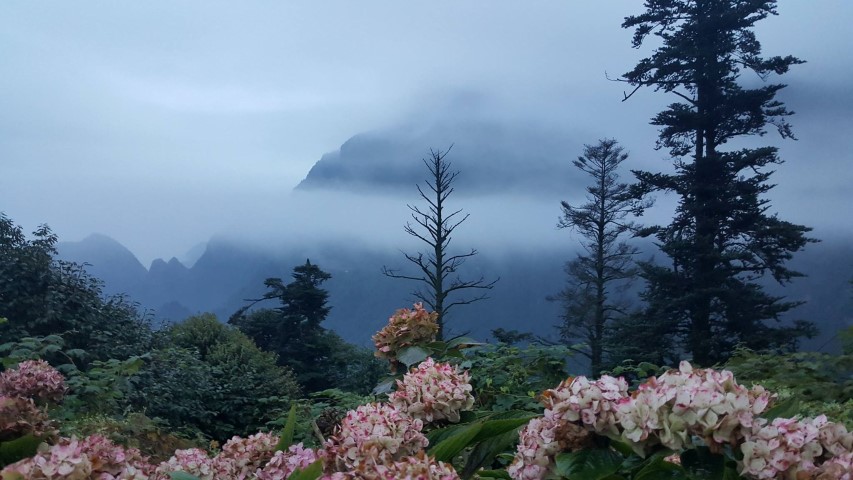