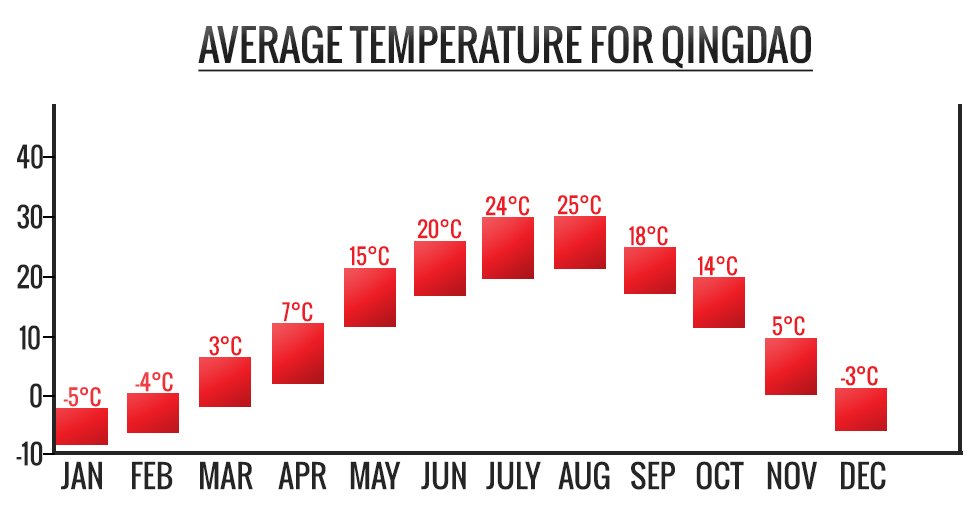 
The city of Qingdao is located in eastern Shandong province and borders the yellow sea resulting in a temperate monsoon climate with distinct marine and oceanic features. The four seasons of Qingdao are comparatively mild, with no extreme hot or cold temperatures. As the city neighbours the sea, it is very common for strong winds, especially late at night. However, fortunately it hardily rains, maybe once every few weeks so no need to bring an umbrella here! The golden periods to visit Qingdao would be from March-November.

Spring is from March to May, it is a favourable season with plenty of sunshine. Although changes of temperature are very frequent, some days may be warm, whilst the next day can be very windy.
The end of April/beginning of May will start to get warmer as it approaches summer. A coat and scarf would be most suitable for every day wear in Spring.

Summer is from June to September, it can be quite hot and humid at this time. There are occasional heavy showers during this season due to being under the influence of the monsoon climate. July and August are the hottest months and it’s very popular to go to the beach and swimming in the sea. The fine weather also coincides with the annual Qingdao Beer Festival. Skirts, shorts, t-shirts and sandals would be perfect for days but bring a light jacket for evenings on the beach.

Autumn is from October to November, this season brings a pleasant cool sea breeze across the city. Although as winter approaches it is best to prepare winter clothing such as jackets and sweaters for everyday wear.

Winter is from December to February, is it very cold with frosty weather and minus temperatures. As the sea does not freeze but prepare to expect extremely strong winds. You should invest in heavy coats and warm sweaters as well as scarves, hats and gloves for the winter season in Qingdao.