When I was asked by one of our NGO partner companies here in Chengdu to join them on a company trip to Yunqiao village accompanying one of our participants, I became very excited. This NGO are a non-profit Community Service Organisation approved by the Chengdu Civil Affairs. Their mission is to “improve ecosystems by working directly with communities to achieve sustainable development and the construction of an ecological civilization” – the organisation offer internship opportunity CDNGO06. 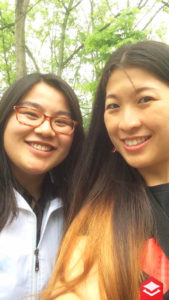 I was accompanying InternChina participant Rosa on the trip to Yunqiao Village, during the entirety of the trip I was discussing with Rosa about her stay in China and her internship with the NGO. Rosa has been here for about 6 weeks and is half way through her programme; her official role at the company is Ecological Marketing Associate.

Rosa is in charge of writing promotional material and placing volunteer activities on record but she has been involved with a lot more than this, she has actually managed entire visits to Yunqiao. Rosa has also been responsible for applying for grant schemes which has included the creation of projects and allocating budget.

I was happy to hear how much she enjoys her internship, before coming to China she didn’t expect to be as involved in the day to day projects. She has been very impressed with her colleagues’ passion, especially with the Yunqiao Project that she also tries to put her heart and soul into it.

On the day of the company trip I was very nervous as I didn’t know what to expect as well as being a representative for InternChina. Little did I know, how important this day was for the company itself.

My day started around 6 am wondering what the trip would be like, obviously it wasn’t a normal workday. I was informed that 50 students from Baruch College in New York would be joining us, so I was getting prepared to meet the students and talk to them about InternChina and its work as well as gathering my business cards to go.

With my breakfast in hand I headed out to meet Rosa at the hotel where the students were staying. There I met Alina, the students’ coordinator and two of Rosa’s Chinese colleagues at the NGO. After making final arrangements and assisting all the students into the buses, we headed out towards the North West of the city at around 8:15 am.

Two hours later we arrived at a small village named Yunqiao (云桥) in the Pidu District. After arriving we met the Project Manager and he informed us about their work, especially in the area. One of the companies projects is the rehabilitation and protection of Chengdu’s Yunqiao Wetlands Water Resource Protected Area.

But what is so special about this area? Yunqiao is located between the confluence of two of Chengdu’s most important rivers: the Botiao and Xuyan rivers. Botiao is one of the four “mother rivers” of Chengdu city. Along with Xuyan river, they both are the major source of drinking water for the city. 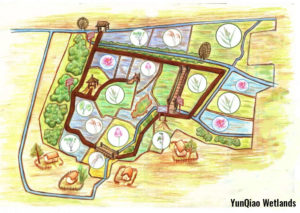 The “Magical Earth” project is an initiative to protect native plants and animal habitats in the Yuanqiao Wetlands. One of the major problems in the area is the alligator weed (Alternanthera philoxeroides) which is a non-native species; alligator weed is considered a major threat to ecosystems because of its negative effects to both aquatic and terrestrial environments.

Through the joint efforts of government departments, community organisations, scientific research institutions and entrepreneurs, the recovery and management of Yunqiao wetlands has been gradually and successfully implemented.

Even though the initiative is very important for the village itself, unfortunately only a few villagers volunteer. But several international companies not only provide volunteers, they also provide donations.

This day was a day to celebrate. After the Project Manager explained to us the importance of the wetlands, we witnessed the signing of an agreement between Rosa’s Internship Host Company, the local government and the head of the village. This agreement recognizes Yunqiao village as a natural protectorate, which gives the area an official status of a natural reserve. 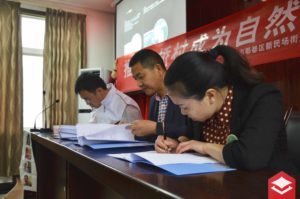 We were able to see the wetlands ourselves and get our hands dirty by pulling out some alligator weed. Unfortunately, the weather wasn’t in our favor. This made it difficult for us to stay longer and for me to explore the area a little more.

The overall experience was very rewarding. Sometimes we take for granted what nature can give us and this trip has been a eye-opening experience. Therefore, I am happy I was able to meet very passionate people within the company who are willing to give that extra push for the environment. 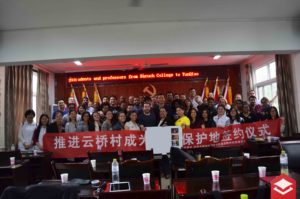 Especial thanks to our partner company and Rosa for providing us the diagrams of the area.

Come and experience China with us! Do your internship with a NGO and apply now!