Qingdao is a prosperous port city bordering the Yellow Sea on the East Coast of China, renowned for its beaches, beer and BBQ. We’ve put together a summary of the city for those of you who are thinking of coming here in the near future.
Given that the population is somewhere near 9 million (!), the city manages to retain a relaxed atmosphere as the population is quite spread out. Qingdao’s status as the 7th biggest shipping port in the world brings in plenty of businesses and opens up many internship opportunities here. And the local dialect (青岛话) is not so different from standard Mandarin, making this a great place to learn Chinese.
Here’s a rundown of what you should know and why you’re making the right choice to choose Qingdao!

The city has been through a tumultuous history, here’s a quick breakdown for you:
1891 – The Qing Government start developing and fortifying the ‘Jiao’ao Area (胶州湾)’ as Qingdao was then known. No longer a sleepy fishing village Qingdao is on its way to becoming a city.
1897 – The Germans colonise the city calling it the “Kiautschou Bay Concession” and build many of the buildings you can still see in Old Town today. Until the outbreak of WWI.
1914 – The ‘Siege of Tsingtao’ starts the Japanese occupation of Qingdao during the war.
1919 – The post-war Versailles Peace Treaty grants Japan control of Qingdao, sparking outrage in China and leading to the May Fourth Movement (五四青年节活动). The famous red statue in Qingdao’s May Fourth Square (五四广场) commemorates this movement.
1949 – After being passed between Chinese and Japanese control, Chairman Mao Zedong and the Red Army firmly reclaim Qingdao.
1984 – Implementation of the “open door” policy encourages foreign trade to Qingdao and it quickly develops into the port city you see today.

So, in other words the city has been influenced from all directions and fought over for many years, but don’t worry it’s still managed to retain its essential spirit! There is traditional Chinese culture and charm to be found even while the city is modernising and expanding at a rapid rate.

Qingdao is pretty much bang in between Beijing and Shanghai on a map, but it couldn’t have a more different feel from either of those cities. From the winding, hilly streets of Old Town, to the bustling market life of Taidong (台东), on to the international hub of the Central Business District, then on east to the newly built avenues and glass skyscrapers of Laoshan District, Qingdao has a pretty unique feel. The “red tiles, green trees, blue sky and blue sea” of the Old Town and Badaguan (八大关) area are a legacy from the German era.
Fun fact: The German Governor who actually built them was actually fired by the Kaiser for spending outrageous amounts building his personal residence.
Nearby, Laoshan mountain range (崂山) that curves around the east of the city is credited as one of the birthplaces of the religion Taoism. It is home to hundreds of hidden paths, temples and waterfalls. There’s also a smaller mountain in the heart of the city, Mount Fu (浮山), which boasts wonderful views of the city, opportunities for bouldering and abseiling as well as multiple tunnels and bunkers that beg to be explored.
The Qingdaonese love nothing better that to treat their friends and family to barbecue skewers, local seafood and a jug of Tsingtao Beer. Especially during the summer months after a day on the beach. Be prepared to shout out “gānbēi” (干杯) and down your glass at least once for every person around the table.

Getting In and Out

Qingdao Liuting International Airport was named the 16th busiest airport in China in 2015, with an insane 18,202,085 passengers passing through that year. The Port of Qingdao is the one of the top 10 busiest ports in the world, handling millions of tons of cargo every year.

There are direct international flights to nearby Korea and Japan (less than 3 hours away!) as well as airlines that heard to Singapore, Bangkok, Taipei, Hong Kong, Frankfurt, Melbourne, Vancouver and San Francisco. Not to mention regular domestic flights to Beijing, Shanghai and Guangzhou that make Qingdao extremely accessible. The InternChina staff will pick you up from Qingdao Liuting Airport which is about 30KM from the city centre.

Fast trains from Beijing (4 ½ hours) and Shanghai (7 hours), as well as night trains to many other parts of China offer plenty of travel opportunities within China too. Most trains leave from the old station located in the Old Town but newly built Qingdao North Station also runs a few passenger trains every day.

It is even possible to catch the boat to nearby Incheon, Korea or even Japan if you a fan of sea travel.
N.B. Please do not attempt leaving China during your programme unless you have a multiple entry visa for China, otherwise you will not be allowed back in!

Public transport in the heart of Qingdao consists mainly of buses and taxis. There are 260 bus routes in the city that cost about 1 or 2 yuan a journey, and 4 taxi companies that will set you back about 9 to 20 yuan a ride (depending on the distance). Remember to look out for the red light to catch an available taxis, and avoid the yellowy green light that means that taxi has already been booked.

The Qingdao Metro is also on its way to being ready for public use! Line 3 already has 6 working stops in the north of the city and a section of Line 2 should be open in 2017. Soon to be followed by other lines in the coming years. 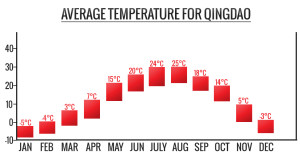 The four seasons of Qingdao are comparatively mild where China is concerned, with no extreme weather conditions, but strong winds often blow in from the sea especially late at night. It hardly ever rains but you do occasionally find clouds of sea fog drifting in to engulf the skyscrapers. Top temperatures are usually hover around a glorious 25°C (77°F) in July and August (ideal beach weather) and dip to an average -2°C (28°F) in winter.
For more details about the climate in Qingdao, see here.

Qingdao is best known for an array of seafood specialities and Shandong ‘JiaoDong’ style of cooking, also known as ‘LuCai’ (鲁菜) – characterised by its light aroma and fresh taste. People are often glad to hear that the food in Qingdao isn’t incredibly spicy but is still wonderfully flavourful.
Some of the most famous dishes in Qingdao include sautéed clams, caramelised sweet potato, fish dumplings, special ‘fengwei’ aubergine, mysterious sea cucumbers and all kinds of seafood. The city is also well known for its amazing street barbeque.

If seafood isn’t your favourite thing to eat, there are plenty of other options. Halal noodle dishes and sumptuous vegetable options can also be found, along with plenty of places to try cuisine from all over China including amazing DongBei, Xi’an, Sichuan and Yunnan restaurants. And of course, there is an abundance of foreign restaurants too, including Japanese and Korean food influenced by Qingdao’s proximity to South Korea.

As for what to drink while you’re in Qingdao, there is Laoshan’s famous green tea grown just outside the city, and if you are interested in something stronger, Qingdao is the home of Tsingtao beer. Not only can you buy several varieties freshly distilled in the city by the bottle, but in some places you can even get your beer in a plastic bag!

There are many reasons people fall in love with Qingdao, in fact it’s frequently been voted one of China’s top-most livable cities. A big part is the clement weather and fresh air, many people escape the piercing heat of China’s inter-cities to the cooler shores of Qingdao in summer. Shandong people also have a reputation for being extremely friendly and welcoming, which is an obvious bonus when visiting any city!

Qingdao is also strategically important as an industrial centre, seaport and naval base. The city now has several manufacturing centres and development zones to the north in ChengYang district and west in HuangDao district. All of which makes it an exciting place to do an internship, in an atmosphere of constant development, growth and competition among both huge international companies and small local businesses.

If you still aren’t sold, here’s what some of our interns have to say about Qingdao…
“Qingdao seemed like a decent size but not too big like Shanghai, so I thought it looked like a nice in-between size city to visit. There are also lots of places to go to in the city centre, as well as loads of beaches which makes it popular for tourists.” – Olivia, UK

“Qingdao has a long beautiful beach where you can walk in the summer but it’s also beautiful in winter. There’s also lots of rocks along the beach which are easy to walk on or climb on, and the view is awesome! But the main thing is that you have to go out in Qingdao, you have to get in touch with friendly people, see and visit lots of great restaurants, bars and clubs and lots of other places which you’ll soon love.” – Sarah, UK

“Qingdao has loads of really friendly people- not only IC and the locals but the expat community as well.” – Balti, Germany

“Qingdao is easy to get around, and my internship is close and easy to get to by bus.” – Tom, UK

“Qingdao isn’t one of the biggest cities in China, and for your first time doing an internship here I think that’s better. There is a mix of large and small companies here with plenty of interesting work – and they are always interested in having an intern.” –Timon, Germany

“Sea, mountains and great people, Qingdao has it all!” – Zuzana, Czechia

Check out Qingdao for yourself!