Ni Hao,
Zhuhai has been voted the most livable and romantic city in China. Therefore, I would advise anyone who has never been to China, to make Zhuhai a must see destination! InternChina is always planning different activities and trips for all of the current interns. Let me give you a little bit of an insight of the trips I have been planning over this summer.

The Waterfall Trip was organized by a friend of mine. I helped him organize it by bringing many interns on the trip. The waterfall was about an hour from Zhuhai. Once we arrived there, we had to hike for another hour to get to the waterfall. The water was splendid, the waterfall was beautiful. We were surrounded by nature with no one else but our big group. I would definitely recommend anyone coming to Zhuhai, to go to this waterfall. 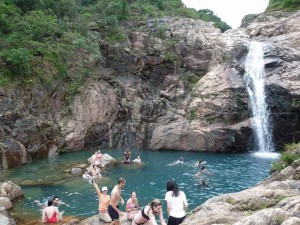 We had the incredible chance to participate in a Taekwondo class with the help of Henry, our customer relations staff. Many interns had never tried this sport discipline. I, myself was pretty impressed on how difficult the moves can be. Some interns were so interesting in it that they signed up to go to the classes twice a week. Come to Zhuhai, you’ll get to train with black belts and learn how to do some wonderful kicks! 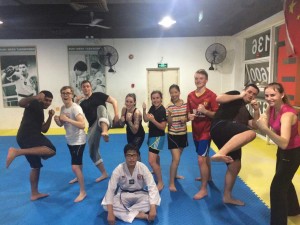 Many of the interns had wanted to see a movie. Of course when Jurassic World came out, we jumped on the occasion to go watch it. We booked the tickets online and got our 3D glasses. The movie was spectacular, we only payed 49 RMB + 10 RMB glasses and it was totally worth it. The movie theatres in China are spectacular (well almost spectacular)! The seats can fall backwards laying almost all the way down. The downside of Chinese movie theatres is the people talking on their phones but if you pick the right seats, you should not hear them too much! 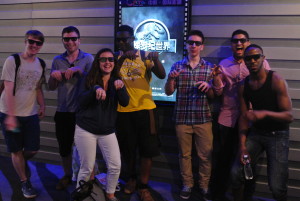 All of the interns had the chance to go to the Pan Delta Super Race Festival. The festival took place at the Zhuhai International Circuit and was held from the 19th of June to the 21st of June. Zhuhai often hosts race festivals which is always interesting for the interns to see. If the interns want, there is also a go kart track available next to the circuit. 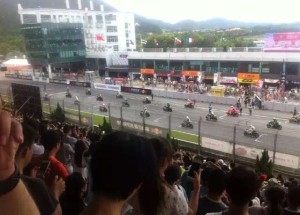 With the help of an agency, we were able to spend a lovely weekend on Dong’ao Island. The island was splendid, surrounded by nature and clear, clean water. We all spent a wonderful Saturday afternoon at the beach before sleeping in tents by the ocean. Zhuhai has hundreds of different islands to be discovered. Come to Zhuhai to explore these fantastic treasured islands! 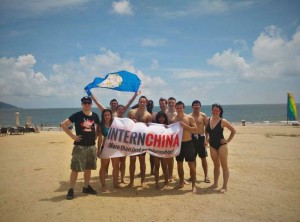 Many of the interns in Zhuhai do not speak Chinese. In fact most of the interns come to China with no Chinese language skills. Chinese Corner is a FREE class that is taught by kind Chinese ladies. The class can be joined by any foreigners and is always welcoming newbies. Recently we went on a field trip to the supermarket to apply what we had learned the week before about fruits and vegetables. 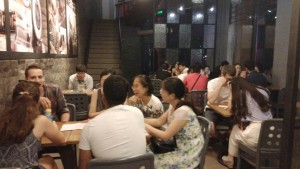 Thought these activities were fun? InternChina offers more than an internship! Hop on a plane and get to China, we are looking forward to meeting you!