Hello hello!
So one thing that has caught my attention in the two weeks I have been living in the beautiful city of Qingdao are the large numbers of shops selling 海参 haishen – or sea cucumbers. Their English name is somewhat misleading, since sea cucumbers are certainly not cucumbers, let alone plants! In fact, they are animals that live in the Deep Seas and spend most of their day making their way slowly across the sea floor. So why are they so sought after here, and why would anyone pay up to 400RMB (around 60 Euros) for one single haishen?

Filled with curiosity, I recently ventured into one of the many shops specialised in selling haishen and was fortunate enough to meet Ms Qin, a sea cucumber expert who works at a store called “Di Yi Ming” (帝一铭). She was so kind as to enlighten me on several fascinating facts regarding haishen and also gave me the permission to take photos of the store and its products. 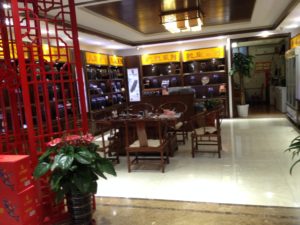 “Di Yi Ming” – which cleverly sounds like the expression for “number one” in Chinese, but is written with different characters – is located on Ningxia Lu in the southern part of Qingdao. Beautifully furnished with carved wooden shelves and a large Chinese style tea table in the middle of the room, it altogether feels more like a jewellery boutique than a shop selling sea cucumbers. But that is because here in Qingdao, sea cucumbers are regarded as treasures, with prices starting from 1800RMB (around 250 Euros) per jin (1 Chinese jin equals 500g) for the least expensive, and up to 11’800RMB (around 1600 Euros) for 1 jin of the most costly haishen.

Put differently, for the crème-de-la-crème, the price for one single haishen can go up to 400RMB (around 60 Euros). However, it is possible to get ones starting from a mere 10RMB per haishen. The price depends on which type of species the haishen in question is, and whether it was caught in the ocean or came from a farm. 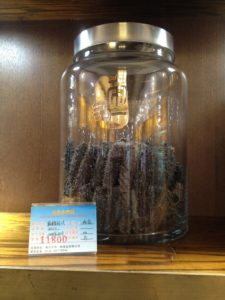 The high wooden shelves are all filled with large glass jars – which in turn are all filled to the brim with dried haishen, waiting to be sold. Their appearance is somewhat underwhelming, at first sight it may be rather hard to understand why these small, dry, dark little knobbly sausages are in such high demand around here. However, after learning about the wide range of benefits that eating haishen can bring, I realized that they are not to be scoffed at. In fact, the medical benefits of haishen are mentioned in the Pharmacopoeia of the People’s Republic of China (中华人民共和国药典), an official compendium of drugs that covers Traditional Chinese and western medicines, as well as in the Chinese Journal of Marine Drugs (中国海洋药物). 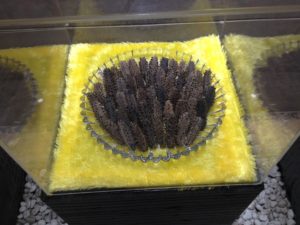 Here is just a small selection of the health benefits that eating haishen can provide:

Ms Qin told me that she recommends her customers to eat one haishen per day and that on average, customers buy 1-2 jin (500g-1kg) of haishen per purchase. I asked her whether the store sells live sea cucumbers, but she told me that all haishen sold here are dried, because this way, their nutrition value is fully preserved, and they can be kept for a much longer time than if they were not dried. In fact, according to Ms Qin, in this dried state, the haishen can be kept for 3-5 years! A dry sea cucumber is approximately the size of your thumb, but before it is caught, it is actually rather large, about the size of your hand. When buying dried sea cucumbers, one needs to first let them soak in water for about 3-5 days before preparing them for eating.

Finally, I asked Ms Qin for her favourite haishen-recipes.

So, in case you want to experience the taste and health benefits of haishen for yourself, you now know how! 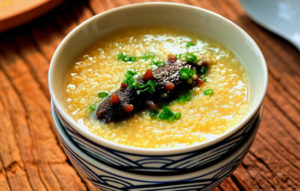