Written by Tanvir Ahmed
My first couple of weeks…they’ve been somewhere between an adventure and a culture shock. Not so much because I’m unaware of the differences between the eastern and western culture (my roots are in Pakistan and things there are similar) but more due to me overestimating how developed China would be. I must give credit to InternChina however, as they made adapting to this beautiful country, an easy process and believe me I’m not an easy person to please :). They provided a Chinese sim card (other carriers WILL NOT work), a POI map, pots, pans, utensils, taxi ride from the airport, guidance and a whole load of help plus anything else I could think of. 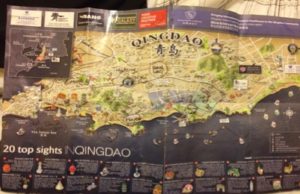 As a Muslim, I had to find halal places to eat and I must say food here is amazing! Something in particular is Lanzhou Lamian. A style of cooking that originated from a mainly Muslim region of China. I’m yet to find an area where there is not one of these. Being a ‘food-aholic’ I have tried many of the dishes in these little gems and for the majority of them, I get confused as to which I’d prefer today. The best thing is that the food places all have pictures of their dishes, so like me, you can just point at whichever rumbles your tumble. 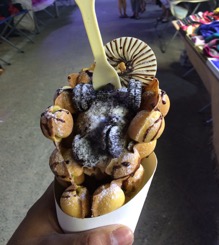 Ever tried a waffle in a cone? Available in an area called Taidong. 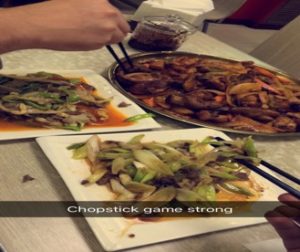 I was keen to show off my chopstick skills on snapchat 😀

The language is not a problem in a city like Shanghai, but for me in Qingdao it means I have to remain optimistic and be creative in getting my message across. I have some knowledge of Mandarin, but it can still be a task to just ask for directions or in ordering a dish. I would certainly recommend learning at least the basics sentences in Mandarin because hardly anyone speaks English. For those more complex scenarios (in my case, how to say I only eat halal), having the InternChina on hand is like is like the ace up the sleeve. Always available (within reason) and respond straight away with whatever you need to know. 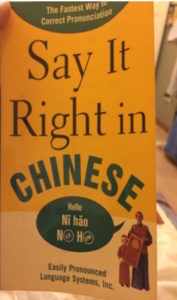 This little book works a charm for me. It has pretty much everything you’ll need and it costs about a £1 on Amazon…No brainer!

I took a trip to the mosque last Friday for an important prayer. Something which really took me by surprise was a young man who realised I needed to get to the mosque and as he was going there, he happily offered me a ride. Anywhere else I would have probably turned around and walked but one thing you will realise in China is the concept of giving and losing face is more important than anything. The Chinese make a huge effort in showing the utmost respect to others. Being a foreigner here is like being a celebrity; you’ll have random people literally asking to take a selfie with you and when you ask them for help they will literally go out of their way to do what they can. On the flip side, some people just don’t have a clue what you are asking but they’ll still try their best to help you…Not sure how that’s meant to work.

The pictures do no justice to the beautiful location where the mosque is situated. I’m going back just to explore the mountain area next time.

advice on chinaChinese Culturehow to
↑