Picture yourself sitting in a restaurant and overhearing a conversation of two random people sitting next to you. You are bored and alone and so you can’t help but listen. They are right now talking about an underground club they were in yesterday until 3 o´clock in the morning. They are talking about the music they heard, the people they saw, and about the cool location.
You will ask yourself: “why does he mention that?” Two people having a conversation about a night out in an underground club. Nothing remarkable about this!

But as I am describing you this image, I just showed you a small part of it. Like a zoomed-in shot in a movie. Let’s zoom out a little, and suddenly we realise the two people speaking, are Chinese. You will once again say: “Ok, but still why is he telling us this?” There is nothing special about it. So we zoom out a little more and notice we are in a Chinese restaurant in a Chinese city, Qingdao. Suddenly you notice that it is kind of special in any imaginable way.

Let us be gentle and say that the underground scene in China is kind of underdeveloped. At least in comparison to the underground subculture in Europe or USA. And regarding electronic music, you don’t usually find a location playing EDM in China. And I don’t mean the type of club where the “DJ” is just some random guy fading one song out and the other in, while hopping around as if he has hurt his foot. You know the kind of guy, wearing his headphone only over one ear, and one hand is constantly waving as if he wants to scare away an imaginary fly that only he can see.

We are talking right now about the real deal. I mean a location where the guy or girl behind the turntables is actually mixing music. A club where you just go to dance and have a good time, and not for showing around the nice outfit you bought yesterday. A club where you’ll find like-minded people all there for the same purpose, gaining mental energy by getting lost of the physical one. All of that, in Qingdao? Of course in Qingdao!

The location I am talking about is literally an underground club, called: “UNITT”. As far as you can already tell by my plaidoyer for EDM you may not be surprised that I am an electronic music enthusiast. If the location is underground I prefer it even more. I got to know about it and the location from a fellow student.

I went there with her on a Saturday night to check it out. The first encounter is always the most important one. In this case it was magical. You arrive at the given address and first you see… nothing! The club is located in the suburbs of Qingdao, so you will find yourself in front of some closed shops and an entrance to an underground car park near a stadium.

My fellow student was pointing at the entrance of the underground car park and told me to listen closely. I heard, very softly, the beat of a rhythm coming from beneath the surface. So, we went into the car park. The sound grew louder and suddenly we were standing in front of the characteristic UNITT sign, a stylized Chinese socket. 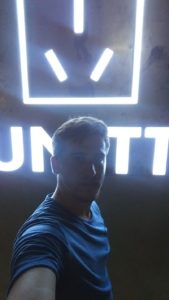 The sound and the beat was even louder, and I suddenly noticed I was craving the beat. We went through the door, made from a cargo container -door, and suddenly we were inside the music. On that night, I had several “first-times”. First time seeing Chinese people dancing in this particular way, first time seeing people being there only for fun and first time seeing a real DJ in China. The whole location with its painted black walls, the small room with the big DJ-desk and the small lights on the table.

All together with the compatible soundtrack, it was a wonderful experience. I was so happy with that whole night and once again with the decision to come to Qingdao. When I left the club, with all my clothes fully sweated and the beat still inside my body I knew I would return. Qingdao has always the ability to surprise you. 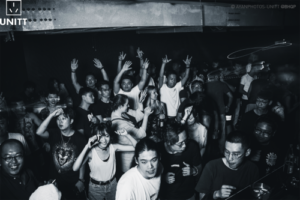