Inner Mongolia is an autonomous region in North China- to the north it borders with Mongolia and the north east tip borders with Russia. The region is a home to the most scorching dry deserts in China, but also (ironically) to the most beautiful lush grassland sceneries.  Hohhot, the capital of Inner Mongolia, is popular among tourists for grassland tours. Another popular place is Xiangshawan, or “singing sands gorge” which is located in the Gobi Desert. It was a region I did not hear a lot about before I came to China, but I came across a local advertisement about a trip to Baogutu Desert in Inner Mongolia.
When I heard that a travel company named Local Ren organises a trip to Baogutu desert (宝古图沙漠), which is the biggest desert in Northeast China, I signed up immediately with my fellow colleague from InternChina. The Local Ren travel agency is actually a student start-up. Although they were not always professional, they seemed very easy-going and were making jokes all the time! In the end, 80 people signed up, who were for the most part international students from all over the world.

On our first date, we left Dalian, Liaoning province and travelled to Fuxin, a town located on the border between Liaoning province and Inner Mongolia. The more we approached the town, the more the scenery changed to endless rice fields. Also, the temperature kept on rising, reaching 32 degrees! Quite a difference from what I was used to in the UK. After six hours of travelling, our local Chinese guide told us that we had reached Fuxin, a rather small town of just 2 million! What I noticed while I was passing through was that there were lots of Mongolian BBQ restaurants, whose signs were written both in Mandarin Chinese and Mongolian. Apparently, both languages co-exist in the region, however Inner Mongolia uses the traditional Mongolian script for their alphabet, whereas the Republic of Mongolia uses the Mongolian Cyrillic alphabet, which they adopted due to Soviet influence. 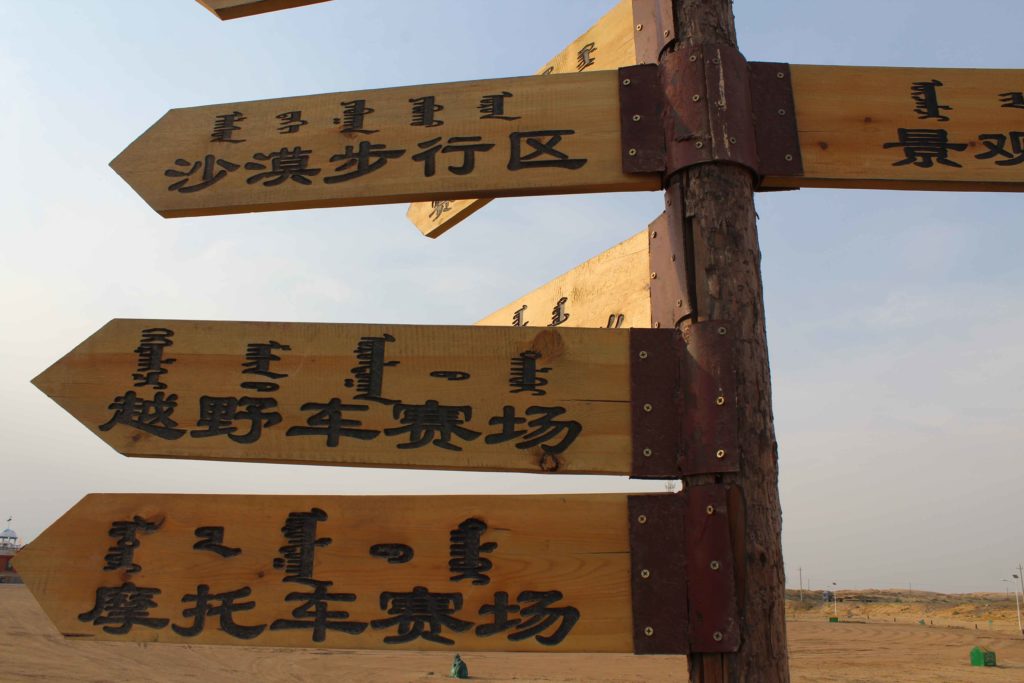 When we arrived in Fuxin, the receptionist had to take a photo of our passport front page and visa. This is a standard procedure in China, that’s why a foreigner must carry their passport all the time when visiting new places. After that, we found a Mongolian hot pot with lamb meat. As the locals were not used to see foreigners, they were buying us more things to try and the servers were very kind and sweet.

On the next day we left for Baogutu desert. On the way, I saw that there were many tree plantations. The guide told me that the government is trying to claim back the land from the spreading desert. There were many trees planted and workers watering them. It would be interesting to see in a decade if their plan is successful.

The road to the desert was narrow and the condition of the road was bad. When we arrived at the tourist centre everything seemed under construction. There were several skeletons of hotels, but there were public bathrooms with plumbing and 3G! The organisers gave us our tents and other students showed us how to build one. In one hour, 50 tents were laid out proudly over a vacant field. After we secured them, we were divided into teams. The travel agency gave us ankle protectors and masks and we set off into the desert.

In the beginning of our hiking, I was not impressed. There were newly planted trees everywhere and I thought it did not look like a real desert. The camel guides saw us and approached us- each of them showing off their animals. They had dressed them in traditional Mongolian colours and were following us along the way like shadows.

The deeper we went into the desert, the more the heat was becoming unbearable. After 30 minutes, a landscape of endless sand dunes spread in front of our eyes. The white sands stretched out over the horizon unevenly and lazily.  There were spots where the wind was unsettling the dunes, but did not impede our breathing.

As we were the only tourists there we had plenty of camels to choose from. It cost only 30 RMB for a camel ride. Also, we could sand board if we wanted to, but most of us were taking photos with the camels which were idly laying in the sand and were not scared by being touched. 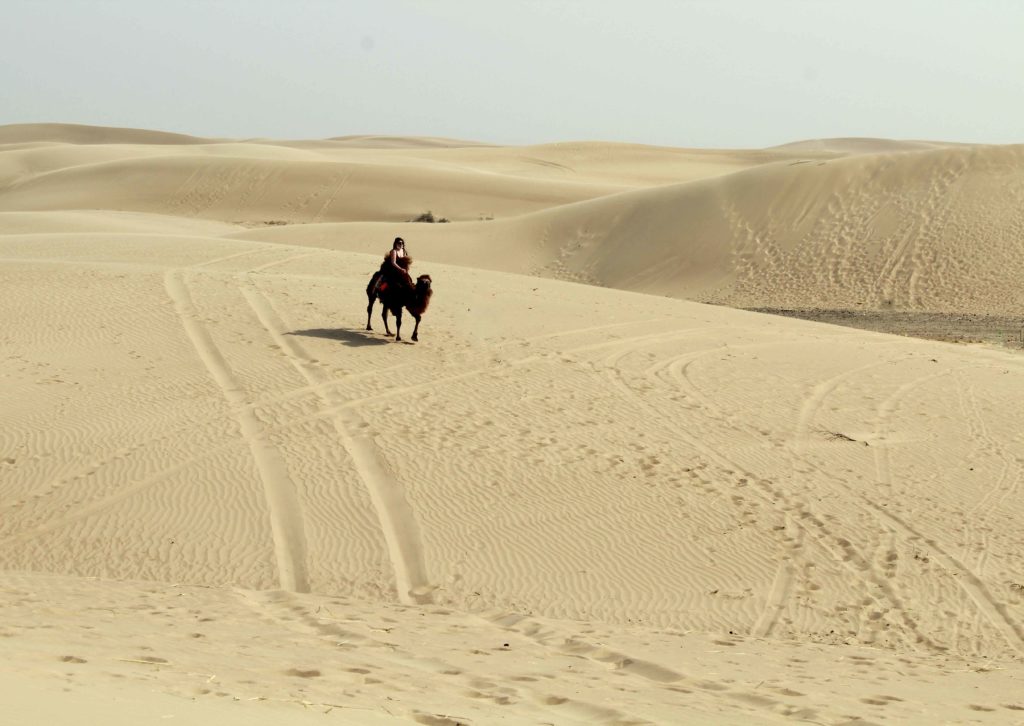 In three hours’ time, we head back to our camping site. Due to the strong wind, we couldn’t have had a bonfire, so we had only a BBQ. The meat was halal and there were plenty of vegetables. The BBQ was like an organised chaos- although no one assigned jobs, everyone just picked what they are good at and stuck with the task. But as the night advanced, the wind grew stronger. Eventually, the organisers asked us to return to our tents as the wind was blowing them away and they were literally people chasing them after. As a result, we returned to our tents, but found a unique way to continue to have fun. A group of Thai people played the guitar and sang from their tent. We connected a microphone to a big portable speaker so everyone could enjoy the music. At the same time, people were sharing what food and drink they had left, despite the hordes of sand that the wind was blowing against us. It was a night to remember!

In the morning, most of us woke up to see the sunrise after the sandstorm. We all helped each other to pack up the tents and travelled 12 hours by bus back to Dalian. Overall, this experience was worth every penny and every minute. If you are looking for an adventure – Inner Mongolia is the place for it!

To have the chance to embark on a similar adventure with InternChina, apply now!