This weekend in Chengdu we went to the Giant Panda Base. 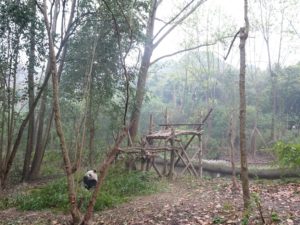 After “warm tips” to go as early as possible before the big crowds we arrived at 8:30 am. Upon entering the Giant Panda Base you’re immediately struck by the serenity and beauty. The whole area contains 16 different enclosures all containing pandas. The largest number of panda’s in captivity can be seen here with over 113 panda’s being born at the base since it opened in 1998.

When we first saw a panda in the base we were amazed, they are truly special creatures. The first panda we saw was sat in his dinner – literally surrounded by bamboo. We watched him for a long time slowly eating his way through the mountain of food that surrounded him. 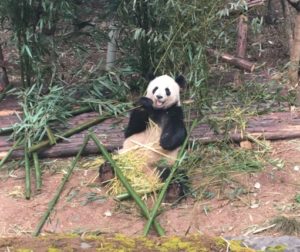 Everywhere we turned we could see pandas. Some climbing to the tops of tall trees, others laying back relaxing. The pandas seemed to be enjoying themselves snapping off bamboo and some even playing with each other. 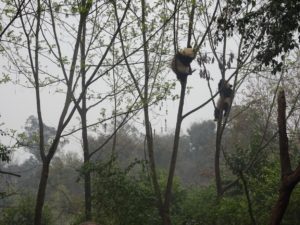 We then headed to see the red panda’s, whilst not as famous as the giant panda’s, their little red cousins are still adorably cute. The red pandas were much more active running around climbing trees and playing. 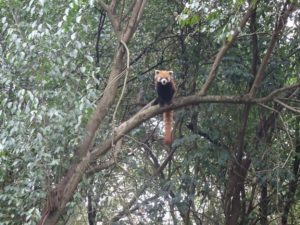 After seeing the animals and exploring the park we headed to the Museum for some more facts on pandas. Learning that the base has improved the survival rate of twins from 50% to 100% as in the wild mothers discard the weaker of twins, there is also a 50% chance of a panda having twins so this has helped to greatly increase the population.

All in all, we had a fantastic time. Seeing the panda’s was definitely on everyone’s to do list whilst here in Chengdu and it did not disappoint.