Last week, people all over China came together with their families to celebrate the annual Mid-Autumn festival.  This is a festival celebrated on the 15th day of the 8th month of the lunar year and is often associated with a type of pastry known as a “moon cake”.  Moon cakes, or 月饼, are extremely popular across China; they are given to relatives, friends, and colleagues during this festival and are seen as a luxurious gift.  However, if you are unfamiliar with Chinese culture and traditions, this may be the first time you have heard of the delicacy.  The cake is surrounded with deep history and folklore and is available with several different fillings cased in intricately designed pastry.  Here is an introduction to the roots and relation of the dessert to mid-autumn festival, the most popular types of mooncake, and the modern development of mooncakes around the world. 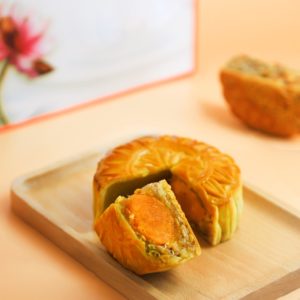 Mooncakes are an extremely traditional delicacy that have existed throughout many Chinese dynasties.  One of the most commonly told stories about the history of mooncakes is the role they played in the Ming uprising against the Mongol rule during the Yuan dynasty.  Ming revolutionaries used the intricate design of these cakes to their advantage.  Cakes were decorated with a design which contained a secret message when pieced together indicating an uprising on the 15th day of the 8th month.  Once these instructions were understood the cake could be eaten to destroy any evidence of the plan.  Ever since this uprising, the mooncake has been heavily associated with the mid-autumn festival which occurs on the same day as this uprising.

Unlike soft, light sponge cakes often eaten as dessert in the West, these mooncakes are extremely dense and heavy.  For this reason, the circular cakes are sliced up and eaten in small pieces, often accompanied by Chinese tea.  The most traditional mooncakes are encased in a shiny, thick pastry (imagine chewy shortcrust pastry with a shiny finish), and the three most popular fillings are red bean, lotus seed paste, and mixed nuts.

Red bean paste and lotus seed paste are both very popular fillings of mooncakes.  Red bean is a common ingredient in many Asian desserts.  Be careful not to confuse this bean paste with chocolate; the similar colour of the two ingredients has been known to confuse tourists around China.  Lotus seed paste is thought to be one of the most luxurious fillings for mooncakes and is popular in southern China, especially in Cantonese regions.  Both pastes create a smooth, sweet, dense filling.  As well as plain red bean and lotus seed paste, some cakes also contain a salted egg yolk in the centre.  Cakes which contain egg yolk are thought to be the most lavish mooncakes around and are highly favoured in China.

Although this pastry is known as a “cake”, not all fillings are sweet.  Another popular filling is mixed nuts, which sometimes also contains roasted pork.  This type of filling is known as “5 kernel” mooncake because it contains a mix of five different nuts inside.  This filling differs to the smooth texture and sweet taste of the red bean and lotus seed pastes. 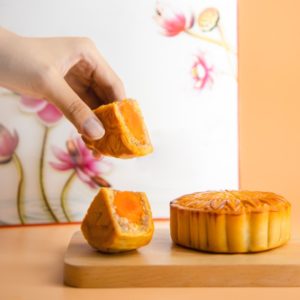 Although mooncakes have been eaten in China for centuries, new flavours are constantly being created around the world today.  From seafood to cream cheese, innovative new fillings are constantly being tested not just in China but in many other countries also.  Some new fillings which have caught on include ice cream, jellied fruit, and green tea.  A new pastry made from glutinous rice has also been used to make “snow skin” mooncakes which are sweet and chewy.  The development of new flavours is popular in foreign countries where the traditional fillings are not commonly eaten, so mooncakes can be adapted to better suit the preferred flavours of that country.

Now that you have a basic knowledge of the most traditional and popular mooncakes found in China, go out and try some for yourself to properly understand the flavour and texture of this rich and historical cake.