Sunlight… finally… It can’t be too far anymore… just keep moving… In life we often face situations that challenge our mental limits, physical limits or even both. Especially in China we, as foreigners, are frequently confronted with situations that seem to be mysterious, surreal or even abstract. These situations often challenge our cultural empathy or, in the case of a broken elevator, even our physical fitness to climb up the stairs. Hopefully your flat or your office is not too high up. I’ve never imagined that I would have had to climb as many stairs as I did last weekend (03.13.-03.15.) Also, I now know that going upstairs is more a matter of will power than of fitness. It all began on Friday when we, the InternChina staff at our office in Chengdu, met up with the German group who had come to Chengdu for a two week business and marketing programme. Besides learning about business and marketing in China, we also gave students the opportunity to study Chinese and learn more about the Chinese culture. As the giant Buddha statue is worth seeing and the Emei Mountain is not far away we went to see both. Determined to go to the top of the Emei Mountain we spent the night at a hostel and started climbing the mountain early on the next morning. Luckily, the weather was nice. 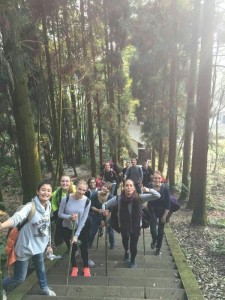 First of all, we realized that climbing a Chinese mountain connotes climbing stairs which has nothing to do with a typical hiking trip in Europe. Secondly, we discovered that the stairs seem to have no end. I need to mention that Paul, the Office Manager in Chengdu, had warned us that this would be a hard trip, but even I was shocked about all the stairs. Moreover, it was a constant up and down. For every set of steps we went down we had to climb up ten. After nine hours of climbing (or a few thousand stairs later) we finally reach the temple where we spent the night. We had climbed so high that we were above the clouds. All of us were exhausted from the hike, so all we wanted to do was having dinner and going to bed. 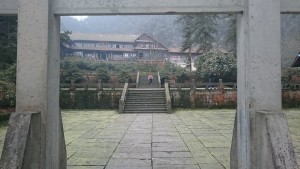 The next morning we got up very early and, after a short breakfast, started our last day on the mountain. After three hours of climbing we reached the snow zone. Despite of the low temperature, most of us were covered in sweat. Determined to climb to the top, we carried on. And then, after what seemed like an eternity, we saw the sun breaking through the clouds. The top wasn’t far anymore. And there it was – the golden statue. We had reached the top of the mountain. 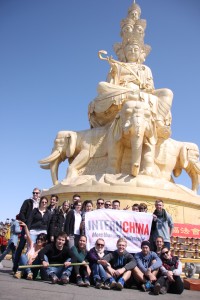