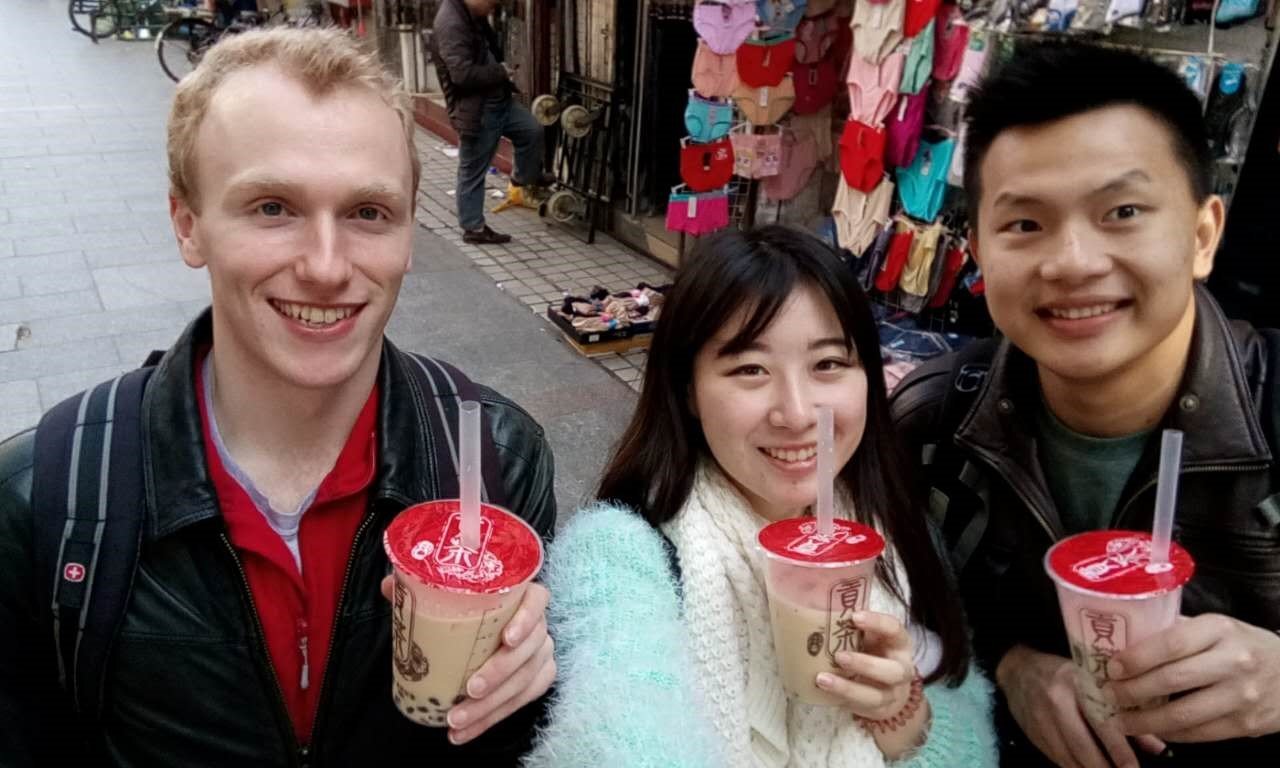 Christmas in China is a unique experience.
On Christmas Eve, I went to a tasty feast arranged by InternChina. The good food and company put me in the festive spirit. To continue with the celebrations, I made a spontaneous decision to go to Guangzhou with a couple of friends on Christmas Morning.

After a rush to throw my things in a bag, I jumped into a taxi to get to the train station. By the time we had arrived, there was a queue out the door, and the train was set to leave in under twenty minutes. My friends and I had already reserved the tickets online, but we still had to collect them at the counter. Fortunately, we all managed to get our tickets and we caught the train on time.

The journey was off to a good start.

The journey took just over an hour.

Guangzhou South Railway Station is huge and modern. It’s a fair distance from the city centre, but a 24-hour pass cost only 20rmb.

The metro system is clean, bright and modern. They have driverless cars, the carriages are wide and every station has glass screens with automatic doors at the edge of the platform.

When we arrived at the hostel, we found out that the government currently has a policy of not allowing foreigners to stay in hostels, which seemed strange. But this wasn’t a problem and we stayed in a nearby hotel.

Once we dropped off our bags, we could start exploring. The city is loud and animated. After walking around, we got some lunch on Beijing Road.

I tried some of the famous bubble tea.

As evening approached, we walked around the park on Yuexiu Mountain, where we saw The Five Rams. They are meant to bring good fortune to the city.

We then made our way to the Flower City Square, near the Pearl River, where we got a good view of the Canton Tower. This structure is an impressive feat of architecture. It stands at 600 meters, making it the third tallest tower in the world.

After some more walking around and being taken in by the lively atmosphere and the modern cityscape, we got some dinner and returned to the hotel to get some rest.

On Boxing Day, we went to the China Communist Party’s Third Congress Museum. It was all in Chinese, but my friends were very helpful by translating the key points.

We then headed over to the Chen Clan Ancestral Hall Museum, which was an academic temple. It is a site of historic and cultural significance, and it contains a number of beautiful pieces of artwork, from pottery to wood carvings and ivory.

Another attraction that we went to see was the Nanyue King’s Tomb in the Museum of the Western Han Dynasty Mausoleum. This was interesting and informational. I learnt that the King was buried with fifteen sacrificial people.

The last site that we saw was Shamian Island, which offers a glimpse into China’s colonial past. The island is a tranquil, scenic stretch of land that is shaded by trees and contains old colonial-era buildings. The southern side is encircled by the Pearl River. A canal separates the northern part from the mainland. Shamian Island was given to the UK and France in the nineteenth century.

The building that caught my attention the most was the old Soviet Union Consulate, which is now abandoned and has fallen into a state of disrepair.

After dinner, we made our way to the railway station and caught a late train back to Zhuhai. It was a different Christmas experience, for sure.

If you’d also like to experience the exciting cultural differences between the UK and China, apply for the GEN UK funding now!