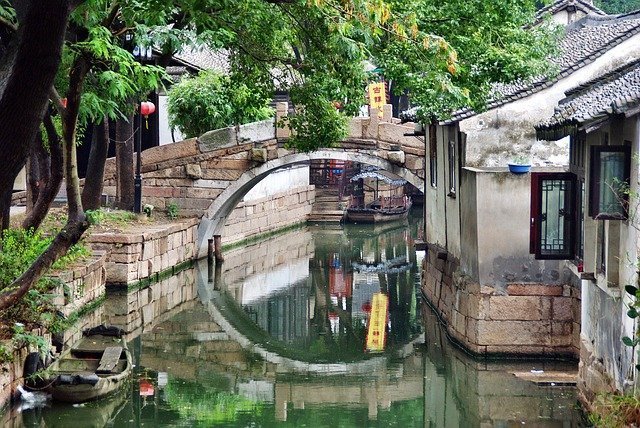 Places to Visit in China: Suzhou

If you are in the east of China it’s easier and cheaper to travel to Suzhou or 苏州. Best bet is to take the train to the Suzhou Railway station. Above all, it’s at the center of the city, so it’s easier to move around.
So what is Suzhou known for? It’s referred to as Heaven on Earth because of its garden landscapes. Back in time, it was widely known for attracting high society, artists, and scholars. Although it doesn’t have all its historical sites anymore, it’s still worth a two to three-day trip.

Another nickname for Suzhou is the Venice of China. There are three notable water towns to visit, and one in particular, Zhou Zhuang Water Town, is a must to see. Especially at night!

Furthermore, there is Old town, located near Pinjiang Road,  is also a great place to visit for a more cultural shopping, cute little tea houses and canals. For the most part, Momi Cafe, an Instagram-like cafe that also sells postcards, is my personal favorite place. You can enjoy a cup of Joe while writing to your friends and family back home.

Then head over to Harmony Times Square or 圆融时代广场 this is where you will find everything you need for your shopping and some fun! Instead of your regular souvenir place, here you will find western brands, luxury brands, a movie theater, cafes, restaurants and more! Not to mention it’s located next to Jinji lake and a few minutes’ walk from a local amusement park, it’s a perfect place to spend an afternoon.

Getting Around in Suzhou

For the most part of the city, there are two metro lines that covers most hot spots. However, I recommend taking the bus since they have more routes if you want to discover the city.

In any event, bring a student card for great money-saving deals on some attractions! 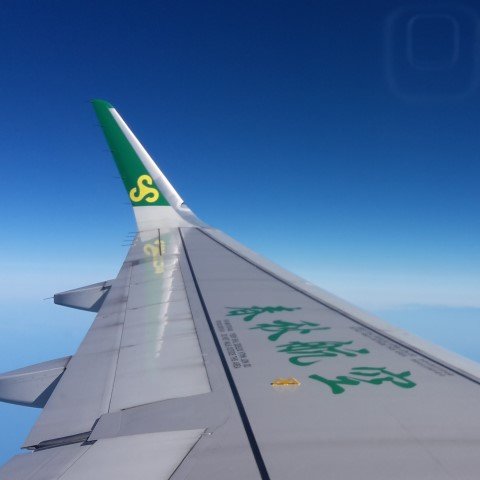 As soon as I finished studying in Suzhou, Jiangsu, I knew I wasn’t ready to leave China, there was so much more that I wanted to learn and experience. Luckily, I found InternChina and the opportunity to use my new knowledge of business in China and basic Mandarin, and so, I began planning my Chengdu arrival.

Back to the Start

When I arrived in China in February 2017, I experienced some culture shock, although that easily went away once I started socializing more with other international students and locals. That’s what I enjoy the most about living, studying, and now working in China- being connected to the international community. Learning about a new city on your own is fun but having tips and advice from people living in the area is always an advantage. Therefore I am excited to be part of the community that InternChina developed in Chengdu over years.

Suzhou is smaller compared to Chengdu, but it does have the same relaxing vibe. It’s widely known for being the Venice of China as it contains beautiful water towns that still look good for their age, along with two beautiful lakes, Jinji and Dushu.

I lived in the urban area called SIP, which was easy because it’s filled with universities and felt like a student city. The city centre boasts a big international atmosphere, and everywhere you go there were foreign students from all parts of the world!

Apart from studying, I took the opportunity to travel as much and as far as I could. My first little city trip was visiting the great Buddha in Lingshan, Wuxi, and later I saw the beautiful and serene West Lake in Hangzhou. Lastly, some fun and exciting nights in Shanghai!

While traveling in China was fun, getting to travel to other Asian countries was great! First, I got to see a breath-taking view at the Victoria Peak in Hong Kong, and then I did some island hopping and hiked mount Hallasan in Jeju, South Korea. Finally,I saw the sun rise over Mount Fuji on my flight to Tokyo.

Now that I am in Chengdu and working, I don’t plan to stop travelling, and alongside InternChina, I’m going to get to know the Sichuan province very well.

Going from school to work can sometimes be difficult, but fortunately for me, the office environment has been very comfortable and fun. I’m happy to work with easy going colleagues who are professional and have strong work ethic. I am excited to introduce InternChina to other schools in the Netherlands and the Caribbean.

Interested in an internship opportunity in Chengdu? Check out the positions that Chengdu has to offer! 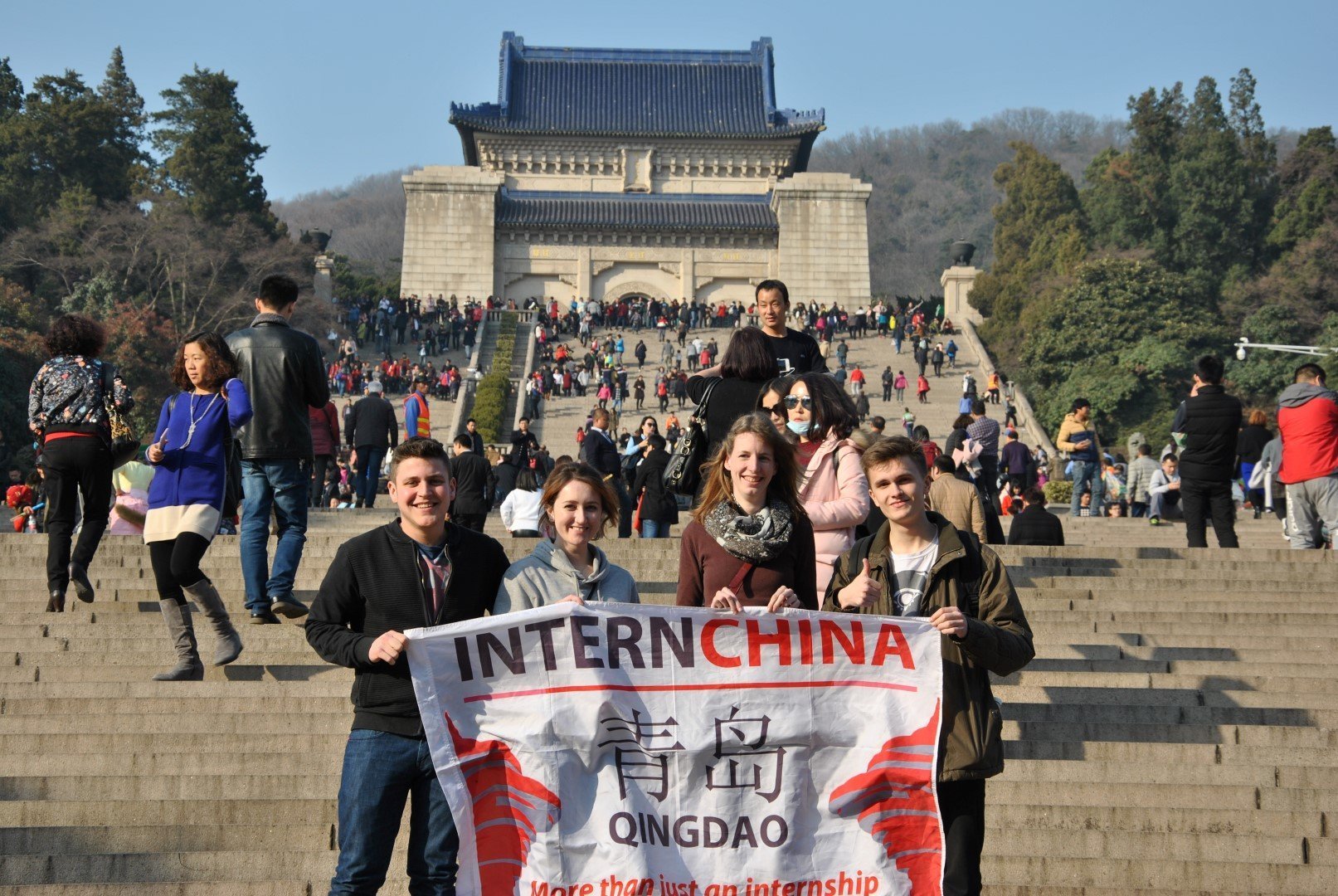 As you are probably aware last week was Chinese New Year, which meant a week off for all of us in China- and as amazing as Qingdao is we decided it was time to explore somewhere else in China. Which is how 5 interns ended up at Qingdao airport at 5.30 in the morning for the first stop in a week long trip to Nanjing, Suzhou and Shanghai. We were planning to spend 3 days in Nanjing (the most recent of China’s Four Great Ancient Capitals in Jiangsu Province), 1 day in Suzhou (home of the world famous Humble Administrator’s Garden) and 3 days in Shanghai (need I say more?) Despite being warned about travelling during the busy Chinese New Year period we were prepared- after all, crowds are an everyday part of Chinese life!

Landing in Nanjing we were immediately greeted with sunshine and warmth, a welcome break from the recent minus temperatures we’ve been experiencing here in Qingdao. We were lucky enough to book a hostel in the middle of the beautifully busy Fuzimiao area, and despite our early start we were eager to see what Nanjing had to offer us. Sunday was spent exploring the Confucius Temple area, the Pedestrian Street, the Wende Bridge and the QinHuai River, along with trying a lot of the local food on offer. That night we were lucky enough to be treated to a New Year’s Eve dinner provided by the hostel staff, which was a great way to try a lot of traditional Nanjing dishes.

Monday morning we set off bright and early (after eating a ridiculous amount of fried dumplings for breakfast) to visit the Sun Yat Sen Mausoleum and Nanjing’s Purple Mountains. After an interesting ride on what looked like a plus size golf cart to the Mausoleum, we were delayed by an eager group of Chinese tourists who wanted photographs with all of us- however their daughter was less eager, and cried every time her mother brought her near us.

The Mausoleum is an imposing, beautiful building based on top of 392 steps and through two grand entrance ways. Dr. Sun is interred there, and he is considered by many to be the “Father of Modern China”- he was involved in fighting against the Qing government, ending the monarchy after the 1911 revolution and helping to found the Republic of China. The scenic area surrounding the Mausoleum also leads to the Ming Xiaoling Tomb of the founder of the Ming Dynasty.

On Tuesday morning we visited the Nanjing Massacre Museum. This was definitely the most sombre point of our entire trip, as you are greeted with statues commemorating those who died, along with a very graphic account of what happened throughout the museum. However it was an interesting visit and definitely a must see for all of us. To lighten the mood after the museum, we spent the afternoon at XuanWu Lake (Xuánwǔhú 玄武湖) and the City Wall.

Wednesday morning was another early start for us to arrive in Suzhou by 11 am. We immediately sought out a late breakfast in the form of amazing jian bing (jiānbing 煎餅) and headed towards Shantang Canal to take one of the canal boats towards Tiger Hill. The canal boat was a relaxing break from all the activity of the past few days, and we soon arrived at the insanely busy Tiger Hill and Yunyan Pagoda (known as “The Leaning Tower of China”). We decided against visiting the Pagoda as we only had a few hours until we caught our train to Shanghai, so we visited the Humble Administrator’s Gardens (Zhou Zheng Yuan) instead.

The gardens as they are today were started in around 1510 by the poet Wang Xiancheng, and was changed and updated up until 1949 when the Chinese government bought the gardens and opened them to the public. It was obvious why the gardens have been granted World Heritage Site status, as they are amazingly beautiful and absolutely huge- every turn leads you to a pond, pagoda, tea house, bridge or collection of bonsai trees. Unfortunately we couldn’t spend long here, but it was still worth the visit.

Our train to Shanghai only took 20 minutes on Wednesday evening, however we still arrived quite late (mainly due to me holding everyone up in the train station after being issued a broken metro card). After finding our hostel tucked away into a side street we intended to go to bed early and catch up on sleep after the last few days however the bars of Shanghai proved too tempting for some of the interns.

We also visited Pudong to get an alternate view of the buildings you can see from the Bund, however the cloudy skies helped us decide against going inside the Shanghai World Financial Center, which at 492m tall gives one of the best views of the city on clear days. We then made our way across the river to the Bund after walking the Lujiazui Pedestrian Bridge (a huge circular walkway set above the traffic).

On Friday we visited People’s Park, a beautiful area filled with people playing mah-jong, cards and also the “Shanghai Marriage Market”. This was definitely something to see, as crowds of parents and grandparents lined the entrance to the park advertising their children to potential marriage partners. Despite the crowds surrounding the marriage market, the park wasn’t as busy as we expected it to be, and was definitely a lot quieter than the Administrator’s Garden in Suzhou. We spent a lot of the afternoon here exploring, and the park has a nice change of pace to the business of Shanghai’s streets.

On Saturday morning we visited the Shanghai Museum in People’s Square, which showcases a history of Chinese art (including pottery, jade, calligraphy and a history of the Buddha’s evolution in art). We also visited one of the fake markets near the Science and Technology Museum.

Despite all the warnings we received about travelling during Chinese New Year, and how we would regret visiting these places during such a busy time, we only had positive experiences with all the transport we took- except for a minor 20 minute delay for our flight from Shanghai to Qingdao. Two flights, two trains, a few buses and a lot of metro journeys later, my first trip out of Qingdao was an exciting one! The crowds didn’t affect our experience at all, and we saw some of the most beautiful places in China during one of the most interesting times of the year.

If you want to experience a trip like this for yourself, apply now!