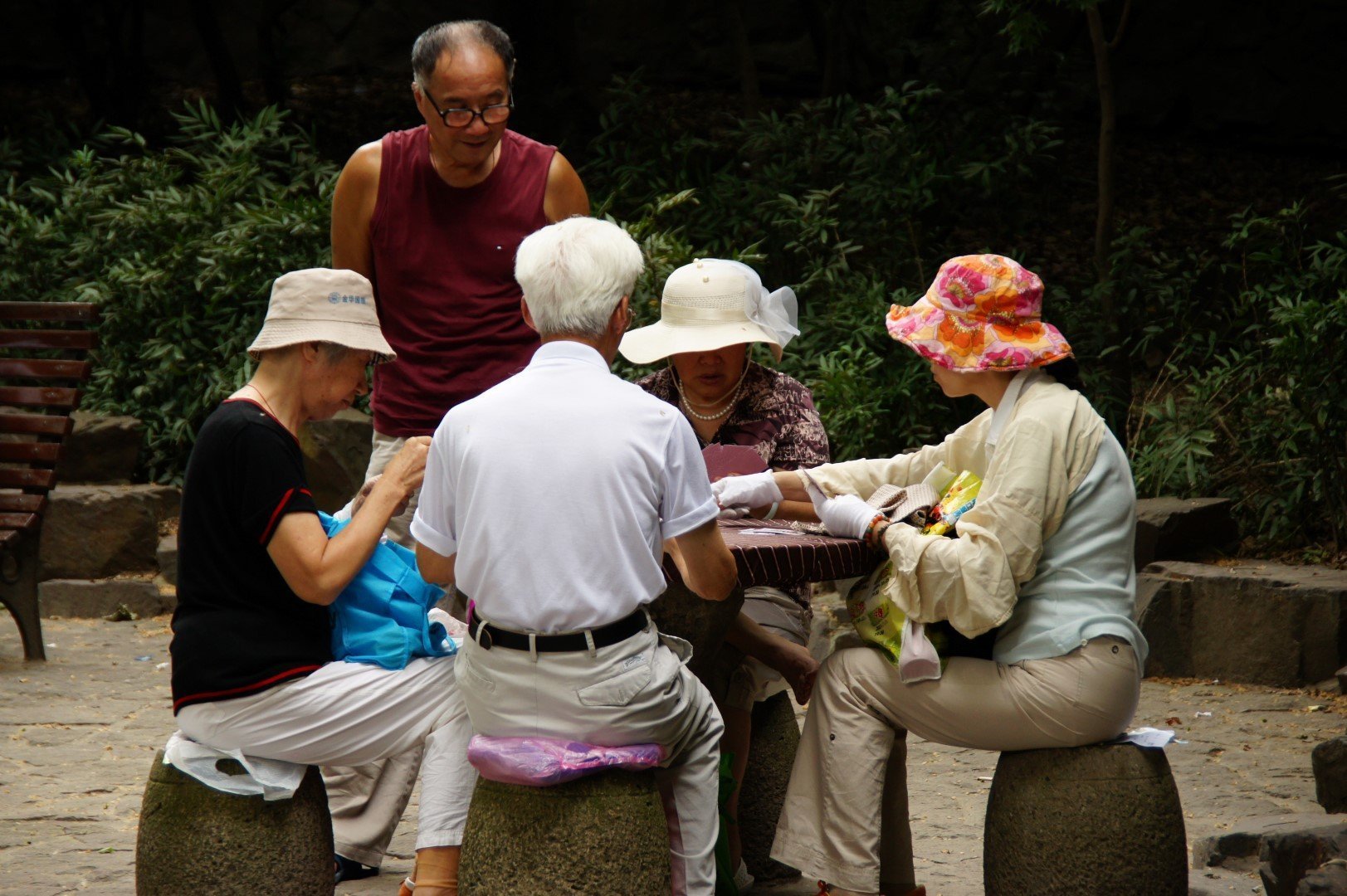 Hats Off for Elderly People in China!

Being in China for almost 2 months now, I have noticed how the elderly are integrated in all aspects of life and how remarkably fit most of them are – even in their twilight years. This is what drove me to do a little more research about it, and finally, to write this blog.
With 144 million people over 60 (which is more or less 10% of the population), the elderly population in China grows at a much faster rate than that of most other countries. Consequently, retired people can be found in all sorts of public spaces

Coming back to the fitness, every morning outside my apartment I spot the Chinese doing impressive stretching moves, performing Taiqi which is known to improve the way energy flows and circulates around the body, and using the free, public sports equipment installed in the outside area of the complex.

But that’s not it for the day. With dawn starts exercise session No.2. In Zhuhai you can watch the elderly swinging their hips to slow, rhythmic and traditional music in front of sights like the Yuang Ming Palace or at Jida Beach.

Being close to the gambling metropolis of Macau, the Chinese here also seem to love spending their evening playing card and dice games. This is either done in private circles close to/ outside their homes or in restaurants – the noise of such activity is quite distinct!

What I find another very interesting phenomenon is that grandparents are the default babysitters for their young, professional offspring and thus become the primary caretakers of children in China. This seems to be the easiest solution for young parents as they can still enjoy their lives and at the same time don’t have to commit their kids to strangers or pay a lot for childcare.

Three generations living under one roof is therefore rather common, and it’s quite normal to hear kids talking about how they grow up with their grandparents. All in all, the elderly still play vital roles in a common household and are valued as an integral member of the family.

Traditionally, elderly people in China were held in high regard and they used to enjoy almost absolute power over their children. With cultural concepts like “孝顺” – roughly translates into: respect and obey your elders – and “百善孝为先“ – of all the good virtues, respecting your elders is the most important one – the Chinese society established ethical codes about what behaviour is acceptable.

One of those codes implies that children ‘shall not disobey’ and another that they ‘shall not travel far’. Adult children are expected to live with their parents to take care of them – failure to do so would mean a major loss of face for any family. This responsibility, and the ties it creates, is very well reflected in the massive family gatherings seen during the Spring Festival, also called the Chinese New Year and National Day holidays.

While this solidarity between the generations may seem eternal, the ‘one-child’ policy is changing the social attitudes of China rapidly. The children nowadays seem to have little respect or time for tradition and prefer to focus on improving their own standing instead.

As a result of that, and also due to a more and more westernized Chinese society, the concept of grown-up children living in their own apartments starts to be widely acknowledged

“Old age, believe me, is a good and pleasant thing. It is true you are gently shouldered off the stage, but then you are given such a comfortable front stall as spectator.”

Here I’d like to point that China is a vast country with distinctive cultures and that this blog partially reflects my own experience and observation in the area around Zhuhai.

If you want to compare how the lifestyles within China vary and what the most interesting differences between our destinations are, click here