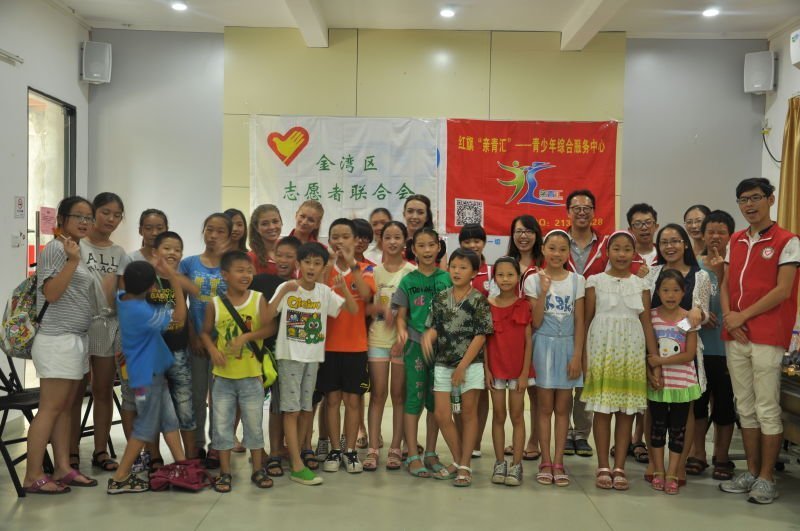 Thumbs Up for our Jinwan Volunteers

By Hayley Gibson and Alicia Wan – 21/08/15
Last week we were offered the opportunity to volunteer at Jinwan School in Zhuhai. The two of us, along with Magda and Pippa decided this would be a great opportunity to get involved with the community, so we took a day off work to help out. On the Friday, we were all picked up from our apartments in the morning and driven to the school which was around 45 minutes away.

After a brief introduction, we were then asked to talk to the children and ask them questions in English, they then had to stand up and respond, allowing them to practise the English they have been learning. Thanks to Magda who got the ball rolling with questions, we eventually became more comfortable and so did the children.

The group then split in half, we took one half of the group, and Magda and Pippa took the other. This section of the class was aimed at teaching the children how to direct tourists. We taught them how to say basic directions such as left and right in English, and decided that the best way to teach was to play games and be interactive with the children. They loved it, and so did we!

The lesson went fairly quickly as it was only 2 hours and at the end we had the opportunity for a photo or 2, which ended up being more like 100 selfies with the children!

After class, Wesley, who is in charge of the volunteers, said that he would be taking us to lunch at his restaurant. This was a great surprise as we thought we would be heading straight home. The food was delicious and it was a great gesture to say thank you.

After lunch Wesley then announced that we would go to his farm to see where the food had come from. Again this was unexpected and a great addition to what had already been a great day!

Overall we had an amazing time volunteering. The teachers were friendly and the children were fun to work with. It was an invaluable experience and we hope to have another opportunity like this again in the future!