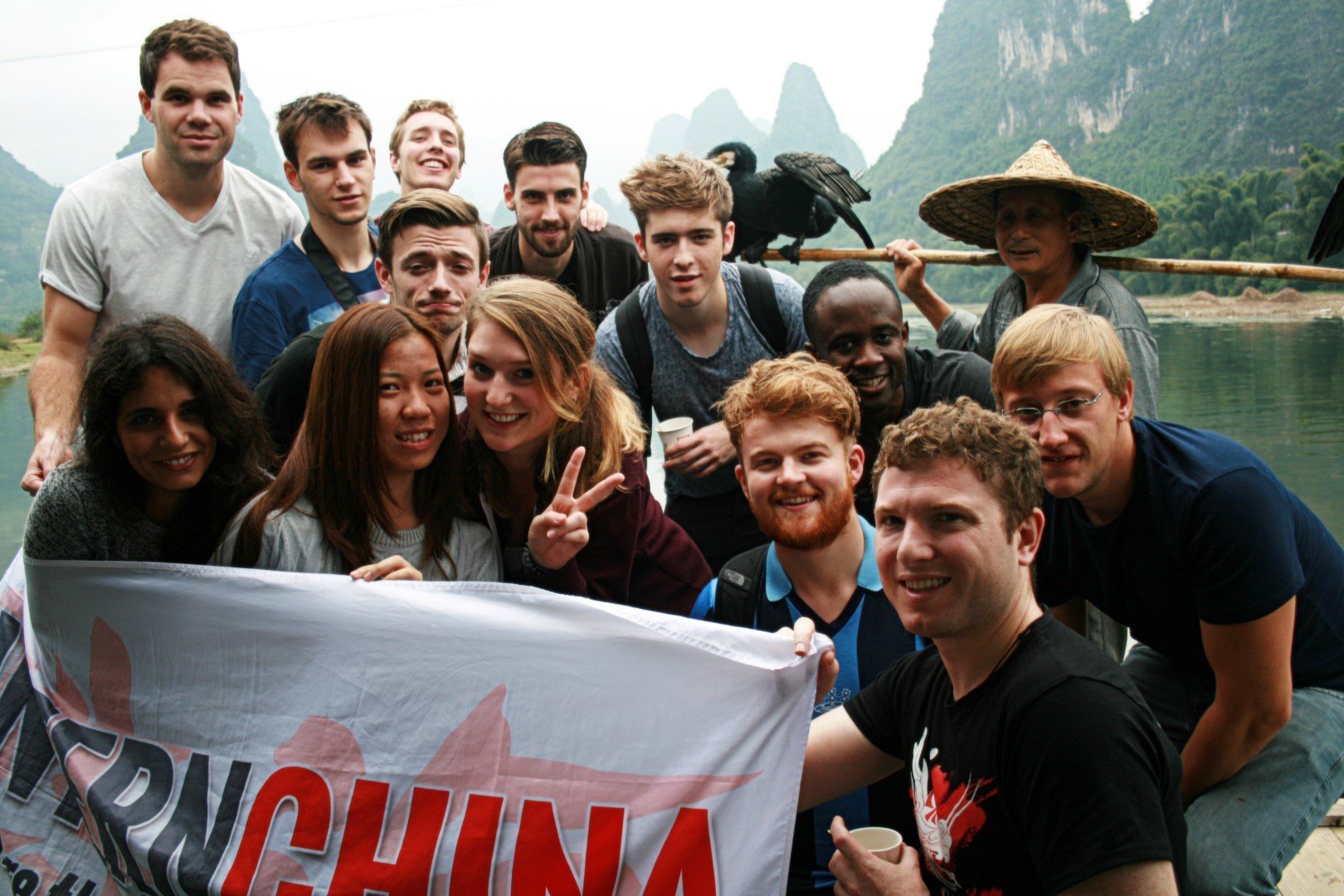 In the beginning of November our InternChina Zhuhai crew started another adventure. This time the destination was called: Yangshuo 阳朔 <<Yáng Shuò>> – a place with unique and truly stunning scenery.
But before I tell you about our trip, here is a little summary about Yangshuo:

Yangshuo County has a fairy-tale landscape with a lot of traditional Chinese, rural culture which has inspired many artists and poets in the past. Its history goes back to antiquity and was established in the Sui Dynasty in 590AD. The architecture and caves allow people to trace back the ancient history. Located in the Guangxi province close to Guilin, the area is a very popular tourist destination and a delightful escape from noise pollution in big cities.

On a Friday we started a 7 hour bus journey from Zhuhai together with about 10 Chinese tourists whom we didn’t know before. Needless to say we were all every excited.

Once we arrived, some of us went to find a midnight bite to eat. The hotel staff told us to be aware of the local “pirates”, which from that moment became the comedy theme of our trip. Nonetheless, we found very delicious BBQ lamb close by, got comfortable on miniature stools for a little while, and made it back safe and sound to the hotel without being made to walk the plank.

The next day we had an early start to finally explore the area and so we got on the bus and went to the world-famous Li River 漓 江 <<Lí Jiāng>>. There we took a boat to cruise along the river and witness the countryside imprinted on the 20CNY note. We also made the acquaintance of these lovely cormorants:

Next we went to XingPing old town aka XingPing fishing village 兴坪镇 <<Xīngpíng Zhèn>> – a street with many small shops and food stalls.

We were prepared for temperatures around 10-15 degrees, however, it turned out to be very sunny and warm that weekend and thus we were not equipped with the appropriate clothes. Speaking of clothes, this brings me to the next point on our budget list: Trying on traditional Chinese outfits at The Big Banyan Tree 大榕树 <<Dà Róng Shù>>. So on top of what were already warm clothes we put another layer of the finest Chinese materials.

We turned into the sight-seeing highlight for many of the Chinese people around us.

About 100 selfies and group pictures later we jumped back on the bus to see the Silver Cave 银 子岩 << Yínzi Yán>>. Luckily we weren’t there during the very busy season and thus had the chance to enjoy the colourfully lit rocks in only partially crowded areas.

But that was not it for the day. The moon-mountain as well as avery eventful dinner was up next.

Last but not least we went to see a very impressive, and the world’s largest natural theatre called Impression Liu Sanjie 印象刘三姐 <<Yìn Xiàng Liú Sān Jiĕ>>. Its stage are the waters and natural islands of the Li River and the twelve mist shrouded hills are its backdrop. The performance with 600+ actors is divided into seven chapters including the preface and epilogue which captured the entire audiences’ imagination.

To round off the day we enjoyed a cool breeze around bar street and celebrated the birthday of one of our crew members!

Like true pirates we woke up the next morning bright and early to continue our expedition. This time we took the bus to Yulong River 遇 龙河<< Yù lóng hé >> to go for a round of relaxed bamboo rafting. Even though the weather was drizzly that morning, we didn’t want to miss out on another great experience. The fog covering the mountain tops even gave the area a mysterious look and feel.

After a carefree float on the river we went for lunch close by before heading back to our beloved Zhuhai!
#Arrrrrrrr