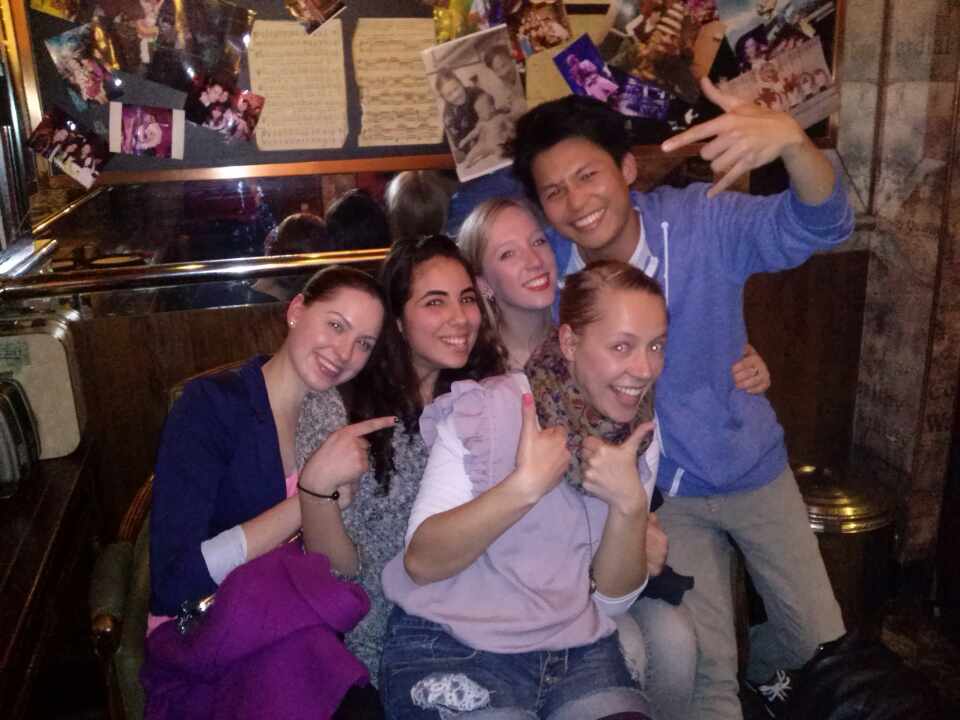 Things To Do in Zhuhai, Zhuhai Blogs, Zhuhai Nightlife
Posted on February 25, 2014

A Night Out in Zhuhai

Hey everybody,
It’s me again. Missed me already?

My time in Zhuhai is flying by! Unbelievable! Just had my first weekend here.

I have to admit that I was a little lazy on Friday. I had a long Skype call with my parents, watched a movie and went to bed. But that was only to be up and awake on Saturday. Starting the day by having breakfast, doing the laundry and doing our nails. Jenny (my beloved flat mate and colleague) and I decided to clean the kitchen and prepare the freezer for the coming summer.

During these activities we got a message that there will be a burger-eating competition at London Lounge (a British bar really close to our flat and the beach).

We did not join in but we did enjoy a normal-sized burger with fries and fish & chips whilst observing the competition. They even had deep fried Snickers Bars. Those 1-kg burgers were so huge:

After that we went for a run along the lovers road, passing the fisher girl .

Having showered and with the plan to go to the bar street, we took the bus and met some of the interns at one of the bars there. Inside some guy was on stage singing Chinese songs. As it was really nice and warm weather on Saturday we sat outside. Some fires were burning and the trees were lighted. It was romantic.

Having drank a cocktail or two we went on our search for a nice Club (first night clubbing in Zhuhai for me). In the first club which we entered, I noticed that there were tables in the whole place. And the people who were standing around those tables were served by waiters. I don’t know about you but I never saw such a club before. Unfortunately all tables were taken so we went out again to search for another club.

In this club, it was the same situation as in the first, tables were everywhere but they had more space in between. When we came in, there was a Chinese guy singing and the whole club sang along from time to time. We tried to join in a little! Some minutes later the stage was open to jump on and dance. Which we did. Funny thing that you could see was that in the beginning there were only foreigners dancing. But later some Chinese dared to show their dancing skills and soon two of them asked us to join their table. They invited us for some Chinese wine and a Budweiser.

Being back on the dance floor it didn’t take long for a woman to invite us to her table. VIP this time. They had a huge bottle of cognac on their table and also Chinese wine. We were offered different fruits, snacks and green tea, too.

Also, I was presented with a really expensive bouquet by one Chinese guy. Awesome!

It was a really nice evening in which we made a lot of local friends. I am looking forward to our next night out.

Gianna aka Gini aka 吉娜。

P.S. Some of you might want to know what happened to my back after the cupping about which I told you in my last blog. Well, those circles act like normal bruises even though they are much bigger and unusually many. At the moment they have some green-yellowish color. My back still feels a little sore I have to admit…

Apply now for an internship and join us interns on a night out in Zhuhai! 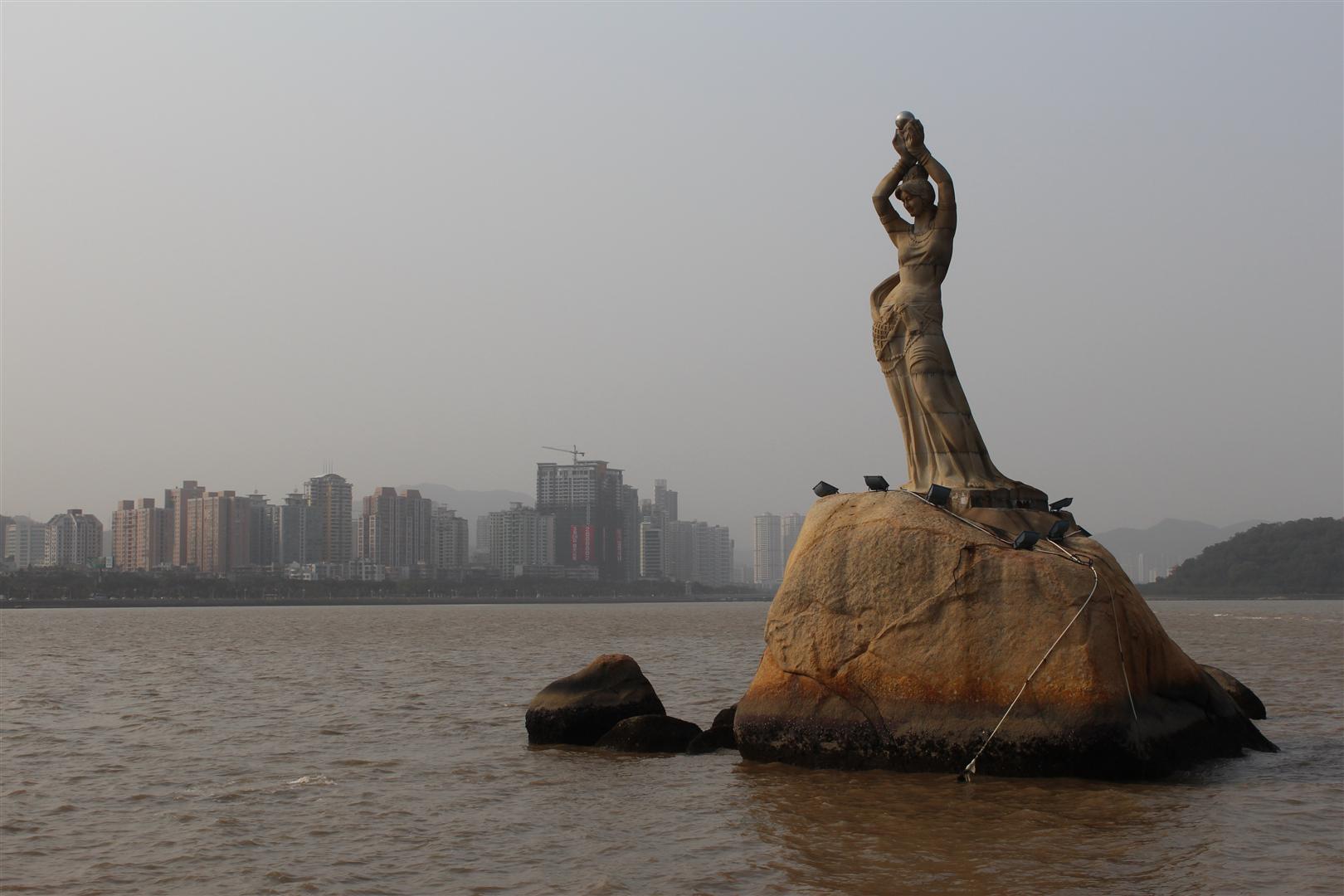 From Zhuhai to Chengdu: Jack’s First Week in China

I couldn’t have asked for a more adventurous first week in China. As soon as my ferry docked in Zhuhai I was met with an array of exciting new sounds, smells and tastes. I was able to explore the city straight away and it wasn’t long before I had adjusted to the heat and humidity and was able to settle into the Chinese way of life!

By the end of the working week I had barely scratched the surface of what Zhuhai has to offer and still had so much more to see and do. However, this would have to wait as I planned to get back on the plane to spend a weekend with the interns in the Chengdu office! Living in China gives you easy access to a range of incredible places and enables you to travel around and see the sights – a trip to Chengdu was the perfect opportunity for me to do this!

Chengdu is an incredible city and it was great to be shown around by the Internchina locals! During my stay I was able to try an entirely different type of Chinese cuisine: Chuanchuan, (which was amazing and VERY spicy!!). However, the highlight of my trip was seeing the iconic Chengdu giant pandas. As you can see from the picture below, I was not disappointed!

Exploring different areas of China is a fantastic excuse to try new things and gain new experiences. Whilst in Chengdu I saw the Sichuan opera which was an incredible spectacle of musical theatre and artistic talent. During the day I even had my ears cleaned in “The People’s Park” which was definitely something I wouldn’t have done back in the UK!

After a jam-packed first week my jet-lag was finally starting to catch up on me. It was good to know that a warm and tropical Zhuhai was waiting for me when I got off the plane! Having already seen pandas, experienced an ear-cleaning tradition and visited the Sichuan opera in my first week I can’t wait to see what else China has to offer!

Interested in exploring China with Jack? Why not get an internship in China! Apply now or send us an email for more information.